<p>As a trader, it’s difficult to predict the impact of a major trading hub being closed. More often than not, it leads to slow, lackluster trading conditions as traders focus on enjoying their time off; however, because there is less volume in the market, we occasionally witness explosive moves, especially when all traders try to exit their crowded trades at the same time. Less than halfway through the Chinese Lunar New Year celebrations (and associated Asian bank holidays), it’s pretty clear that we’re getting the latter scenario.</p>

As a trader, it’s difficult to predict the impact of a major trading hub being closed. More often than not, it leads to slow, lackluster trading conditions as traders focus on enjoying their time off; however, because there is less volume in the market, we occasionally witness explosive moves, especially when all traders try to exit their crowded trades at the same time. Less than halfway through the Chinese Lunar New Year celebrations (and associated Asian bank holidays), it’s pretty clear that we’re getting the latter scenario.

Markets were extremely volatile overnight, highlighted by a 5.4% drop in Japan’s Nikkei index, the Japanese 10-year bond yield turning negative for the first time in history, and the corresponding rout in USD/JPY, which nearly reached the 1.1400 level that we mentioned yesterday. The risk-off moves have carried over into European trade, where most major bourses are trading down by about 2% (though the UK’s FTSE index is only down 1% as of writing).

In the FX market, one of the big surprises for some traders is that the US dollar continues to fall amidst the global market turmoil. Long seen as a so-called "safe haven" currency, the greenback shifted roles to more of a "risk" currency late last year as the Federal Reserve laid out an aggressive path of interest rate hikes. Now, traders are expressing skepticism that the Fed will be able to raise interest rates even once this year, much less the four times that the Fed laid out in its most recent Summary of Economic Projections.  To that end, Fed Chair Janet Yellen’s semi-annual Humphrey-Hawkins testimony to Congress, starting tomorrow, will be this week’s marquee event risk.

If Dr. Yellen proverbially shrugs off the ongoing global market volatility and the associated economic concerns, the dollar could regain its mojo (though we doubt this would do much to stabilize sentiment toward other markets). Considering the audience though – politicians representing a worried populace – we think it’s far more likely that Yellen will strike a dovish tone, expressing concern with the recent market moves and downplaying the chances of a March rate hike, which traders view as a longshot in any case.

Turning our attention to the world’s most widely-traded currency pair, EUR/USD continues to rally after last week’s big breakout. The pair paused momentarily on Friday and yesterday, but with today’s breakout to a fresh 3.5-month high, and more importantly the move above the 61.8% Fibonacci retracement at 1.1260, the near-term uptrend remains intact.

Meanwhile, the secondary indicators are showing exactly what you’d expect: the MACD is trending higher above both its signal line and the "0" level, showing bullish momentum, though the RSI is peeking into overbought territory (>70). While the overbought RSI indicator may raise a potential near-term yellow flag, it’s important to note that an overbought oscillator is expected in a strongly trending market and not an indication of imminent reversal back to the downside. As long as Yellen doesn’t come off as too sanguine on Wednesday, EUR/USD could extend its rally toward the previous highs in the mid-1.1400s next. 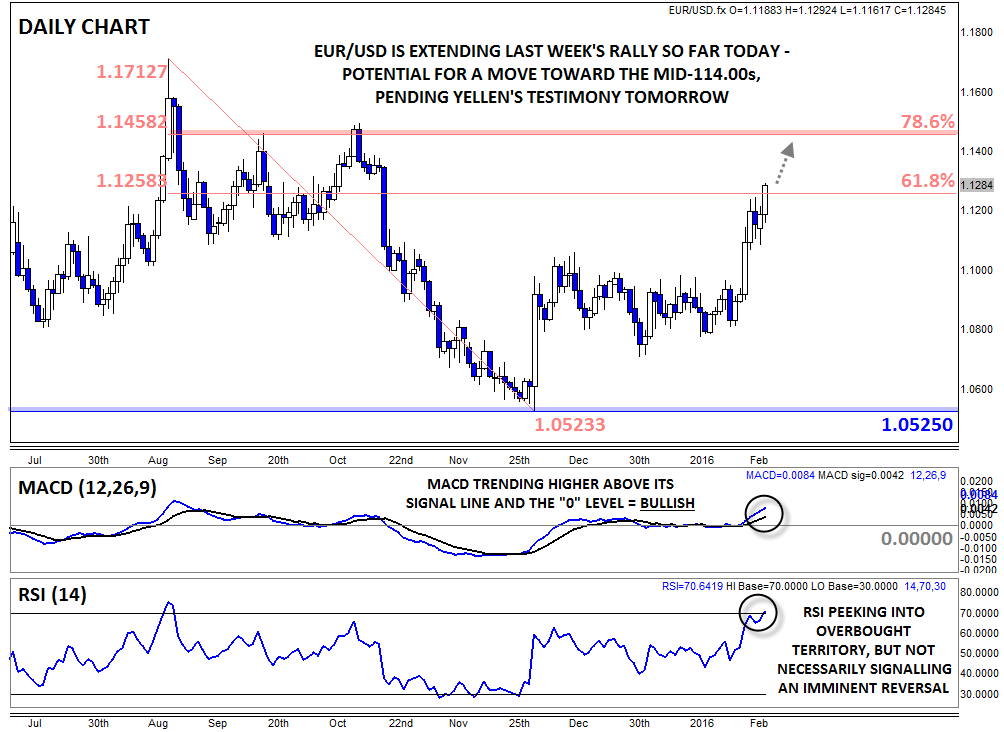