<p>EUR/USD has consolidated within the past week just under a major resistance zone around the 1.1450-1.1500 area. In the process, the currency pair has formed a key bullish flag pattern that could be poised for a breakout if the dollar continues its recent weakening trend.</p>

EUR/USD has consolidated within the past week just under a major resistance zone around the 1.1450-1.1500 area. In the process, the currency pair has formed a key bullish flag pattern that could be poised for a breakout if the dollar continues its recent weakening trend.

Within this consolidation, EUR/USD hit a new six-month high last week at 1.1453, a price level that has not been reached since mid-October. The current consolidation is the latest culmination of a rising trend characterized by higher highs and higher lows since December’s lows near 1.0500.

Much of EUR/USD’s rise in the past four months can be attributed to a falling US dollar that has been pressured by an increasingly dovish Federal Reserve and the resulting lowered expectations for a regular pace of interest rate hikes in the US. Last week’s release of minutes from March’s FOMC meeting revealed much debate within the ranks of Fed policymakers, as well as an overall sense of caution with regard to raising rates due to persistent global economic worries. The EUR/USD currency pair has stayed well-supported because of this dollar pressure, despite what one might expect should be a weakened euro due to the European Central Bank’s own extended easing program.

During the course of the current EUR/USD uptrend, the currency pair has broken out above several major resistance areas, including the key 1.1100 level. In mid-March, the 50-day moving average crossed above the 200-day moving average, suggesting a potentially bullish outlook for the near-term.

Currently just off the noted key resistance zone around 1.1450-1.1500, EUR/USD is at a critical technical juncture. Any sustained breakout above this resistance could go on to target the next major upside target at the 1.1700 level, which was the area of the high reached in August 2015. 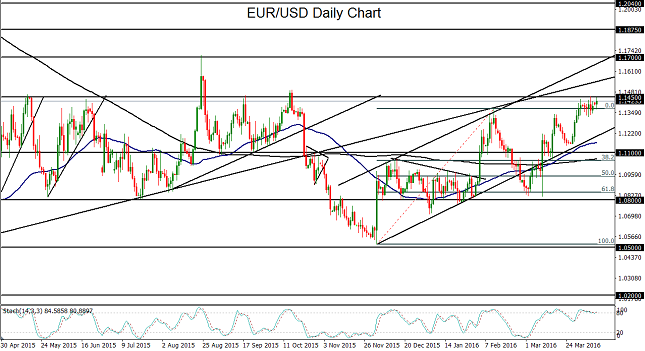