Despite a landslide victory for Emmanuel Macron on Sunday’s French presidential election, the euro was unable to maintain the slight gains it initially made in the immediate aftermath of the election outcome. By Monday morning, the euro had pulled back from its new year-to-date highs against both the US dollar and Japanese yen. The euro pullback was more pronounced against the dollar, as the greenback was in rebounding mode on Monday. Against the safe-haven yen, which has continued to struggle in the face of low risk aversion in the markets, the euro’s pullback has been more modest.

Despite a landslide victory for Emmanuel Macron on Sunday’s French presidential election, the euro was unable to maintain the slight gains it initially made in the immediate aftermath of the election outcome. By Monday morning, the euro had pulled back from its new year-to-date highs against both the US dollar and Japanese yen. The euro pullback was more pronounced against the dollar, as the greenback was in rebounding mode on Monday. Against the safe-haven yen, which has continued to struggle in the face of low risk aversion in the markets, the euro’s pullback has been more modest.

The euro’s failure to sustain a rally just one day after the election was partly due to profit-taking and to a “buy the rumor, sell the fact” dynamic, as Macron’s win was already heavily expected and largely priced-in to the recently rising euro, ever since the first round of the election two weeks ago sparked a sharp relief rally for the shared currency.

Perhaps even more importantly, however, has been a realization that threats to the euro will not simply disappear just because the euro-safe candidate won the election. Macron and his new En Marche! movement will need to gain considerable support within the French government in order to further his pro-euro agenda. In conceding the election to Macron, the National Front’s Marine Le Pen promised to continue her cause under a newly-transformed far-right party that would “lead the fight” during next month’s pivotal parliamentary elections. If Le Pen is able to gain sufficient influence in the French National Assembly, troubles for President Macron and the euro may potentially have just begun.

The European Central Bank is also a key variable factor for the euro. There has been some speculation that the ECB may become emboldened by a euro-friendly administration in France to accelerate policy tightening, including cutting back on its asset purchase program and possibly raising interest rates. Though Macron’s victory may indeed have helped raise the prospects of this eventually happening, as Le Pen risk has been neutralized for the moment, ECB tightening actions are highly unlikely to occur any time soon.

Despite Macron’s win and recent improvements in the eurozone economy, the euro continues to face headwinds stemming from still-present threats to its existence. This is especially the case against the US dollar, which has been struggling recently but should remain supported due to a relatively solid US economy and an optimistic Federal Reserve on a distinct tightening path.

Though EUR/USD broke out above the 1.0950 previous resistance level prior to Sunday’s election, and then went on to hit a six-month high around 1.1020 shortly after the election outcome was known, the subsequent pullback is showing a critical loss of momentum for the euro just as the US dollar has begun to show signs of rebounding. Any continued loss of momentum for EUR/USD in the aftermath of the French election could potentially push the currency pair back down towards the 1.0800 level, which would pare the past month’s gains in half and begin to fill the gap that was created after the first round of the election. 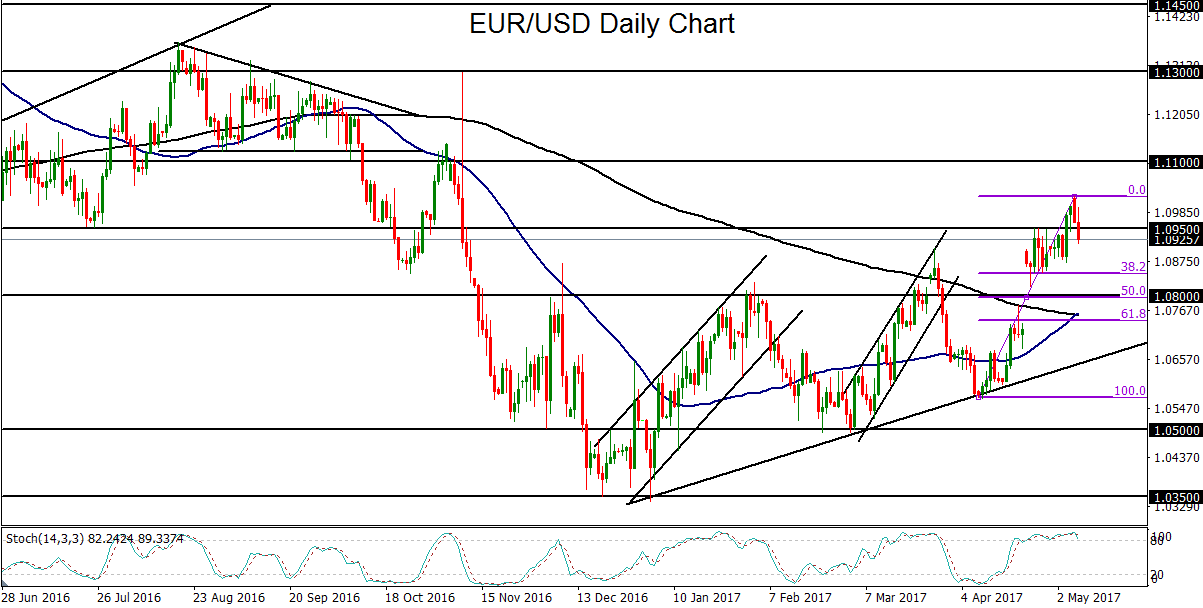