EUR/USD on the verge of breakdown?

EUR/USD has been trading in a relatively tight consolidation for the past month since the immediate aftermath of June’s Brexit vote, when the currency pair plunged sharply below a large parallel uptrend channel. That plunge brought EUR/USD back down to establish a key support zone around the 1.0900-1.0950 area. This support zone is technically significant in that it is also around the 61.8% Fibonacci retracement of the entire uptrend within the parallel channel, from December’s 1.0500-area low up to May’s 1.1600-area high.

EUR/USD has been trading in a relatively tight consolidation for the past month since the immediate aftermath of June’s Brexit vote, when the currency pair plunged sharply below a large parallel uptrend channel. That plunge brought EUR/USD back down to establish a key support zone around the 1.0900-1.0950 area. This support zone is technically significant in that it is also around the 61.8% Fibonacci retracement of the entire uptrend within the parallel channel, from December’s 1.0500-area low up to May’s 1.1600-area high.

As of Tuesday, EUR/USD is sitting just on top of this support zone and continues to carry a bearish bias in the wake of the channel breakdown. Last week, while the European Central Bank (ECB) opted to keep monetary policy unchanged as expected, refraining from announcing any post-Brexit stimulus for the time being, the ECB remains dovish and ready to implement further potential easing measures in coming months. This likelihood of additional near-term easing in the Eurozone continues to exert pressure on the euro.

When this euro pressure is combined with potentially a more hawkish Federal Reserve in Wednesday’s FOMC statement, the US dollar could be further boosted, resulting in a sharp EUR/USD breakdown below current support around 1.0950. Likely contributing to a more hawkish tone from the Fed are: recently improving US economic data, record-breaking highs in US equity markets, and diminished concerns regarding the European fallout over Brexit.

In the event of such a breakdown that is driven by continued monetary policy divergence between the ECB and Fed, the next major downside target continues to be at the key 1.0800 support level. Any further downside move below 1.0800 could then begin to target the critical 1.0500 support level once again. 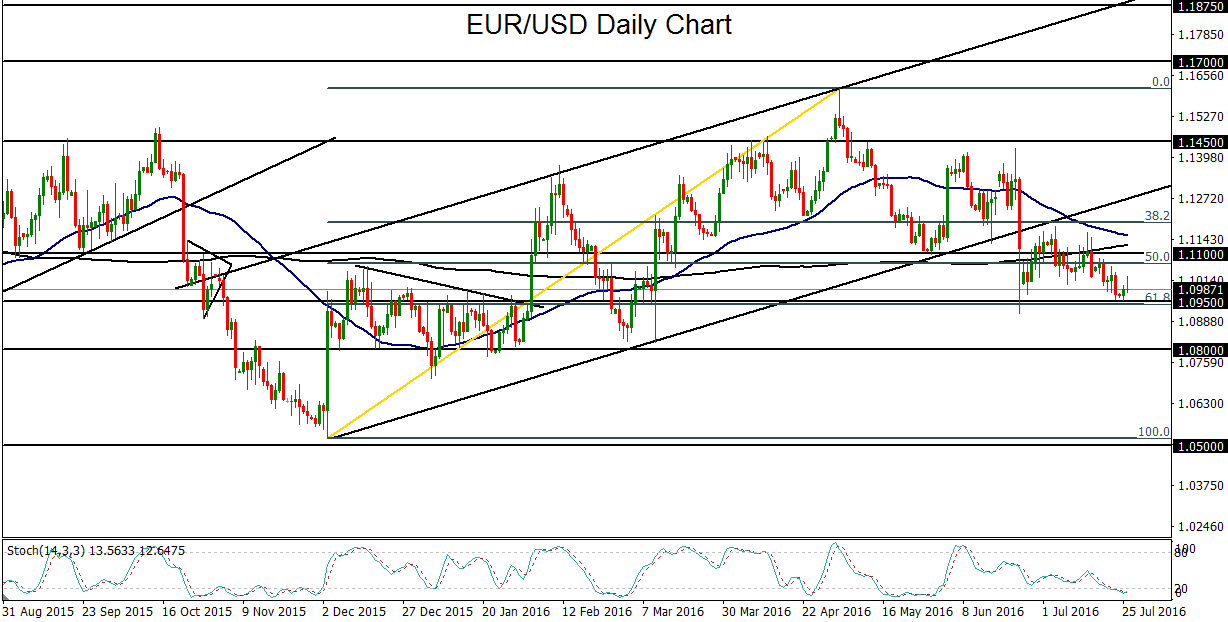