EUR/USD settles in near recent lows, potentially poised for breakdown

After dropping sharply for the past two weeks, EUR/USD has tentatively settled in on Thursday just off Wednesday’s new three-week low under 1.1000. During the course of this precipitous drop, the currency pair broke down below previous major support at the 1.1100 level and has fallen to consolidate around a convergence of its 50-day and 200-day moving averages. It has also closely approached to the downside a key uptrend support line within a parallel trend channel extending back to early December’s low near 1.0500.

The euro has been pressured recently due to several different factors, including the increasing possibility that the European Central Bank (ECB) will soon act to implement additional monetary easing measures. ECB President Mario Draghi recently made comments indicating a strong willingness and readiness to do so. Scheduled early next month is the eagerly awaited ECB Press Conference, which should provide clearer guidance as to what those easing measures may entail. Also pressuring the euro has been the increased threat of deterioration in the European Union, most notably by an upcoming referendum in the UK to vote on whether or not it stays in the EU. A UK exit, or "Brexit," could not only cause potential damage to the UK and sterling, but also to the remaining members of the EU and the euro.

On the US dollar side of the EUR/USD currency pair, extreme doubt earlier in the month with regard to another Federal Reserve rate hike has been mitigated somewhat by relatively benign domestic economic data as of late. Scheduled for late next week are the US Non-Farm Employment Change, Average Hourly Earnings, and Unemployment Rate data for the month of February. As the US employment situation is one of the primary economic indicators taken into consideration by the Fed in setting monetary policy, these data points are typically crucial in reinforcing or changing interest rate expectations as well as the short-term fate of the dollar.

With significant negative factors weighing on the euro, and the still-conceivable possibility of further Fed tightening providing some support for the dollar, EUR/USD could continue its recent downward trajectory to align with its long-term bearish trend.

From a technical perspective, as long as EUR/USD continues to trade below the noted 1.1100 level, which has now become resistance, the stage could be set for a breakdown below the current parallel uptrend channel. In the event of such a breakdown, the next major target is at the 1.0800 support level, followed further to the downside by the key 1.0500 support objective. 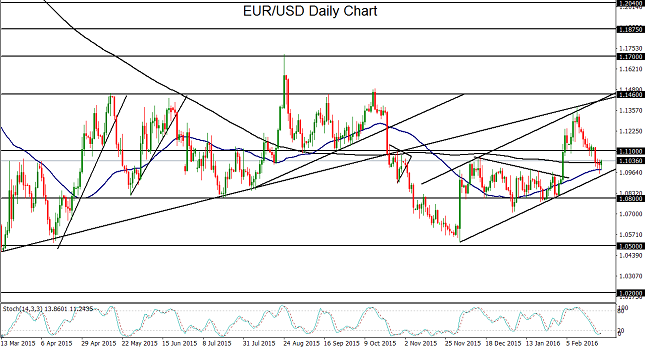