EUR/USD surged to major resistance at the key 1.0800 level on Tuesday after several economic data points from the Eurozone showed higher-than-expected consumer inflation (CPI) for January and better GDP growth for last quarter than previously forecast. Additionally, the unemployment rates for both Germany and the Eurozone as a whole were significantly better than expected.

EUR/USD surged to major resistance at the key 1.0800 level on Tuesday after several economic data points from the Eurozone showed higher-than-expected consumer inflation (CPI) for January and better GDP growth for last quarter than previously forecast. Additionally, the unemployment rates for both Germany and the Eurozone as a whole were significantly better than expected.

Further boosting the EUR/USD were comments from US President Donald Trump’s top trade adviser, the National Trade Council’s Peter Navarro, who stated that Germany was utilizing a “grossly undervalued” euro to “exploit” a currency-driven trade advantage over the US and other countries.

Even prior to the Eurozone economic data and Navarro’s comments on Tuesday, the US dollar had been entrenched in a steady slide since the beginning of the year as uncertainty over Trump’s protectionist policies helped drag down the previously rallying greenback.

This dollar slide helped boost EUR/USD from its late-2016 lows at major 1.0350-area support up to the noted current resistance at 1.0800. Going forward, will this dollar pullback and EUR/USD rise continue to defy the longer-term downtrend for the currency pair?

On the immediate horizon, two key events this week should help determine the answer. The Federal Reserve issues its first monetary policy decision and statement of 2017 on Wednesday. Friday brings the US Non-Farm Payrolls employment data. Although no rate hike is expected tomorrow, if the Fed resumes its recently more hawkish rhetoric, the dollar could begin to recover from its year-to-date losses. Additionally, a continuation of solid data for US employment on Friday should further boost the dollar and pressure EUR/USD. The current consensus expectation is for 170,000 jobs added in January.

On the euro side, the monetary policy divergence between the European Central Bank and the Fed continues to be clear, placing fundamental pressure on the EUR/USD. Although potential Eurozone inflationary pressures and greater economic growth could begin to narrow that divergence further into the future, any potentially stepped-up pace of Fed rate hikes in 2017 should continue to keep US monetary policy significantly tighter than that of the Eurozone. If this is to be the case, the outlook for EUR/USD remains bearish in line with its longer-term downtrend. Any turn back down from resistance could once again begin to target key downside support objectives at 1.0500 and 1.0350. 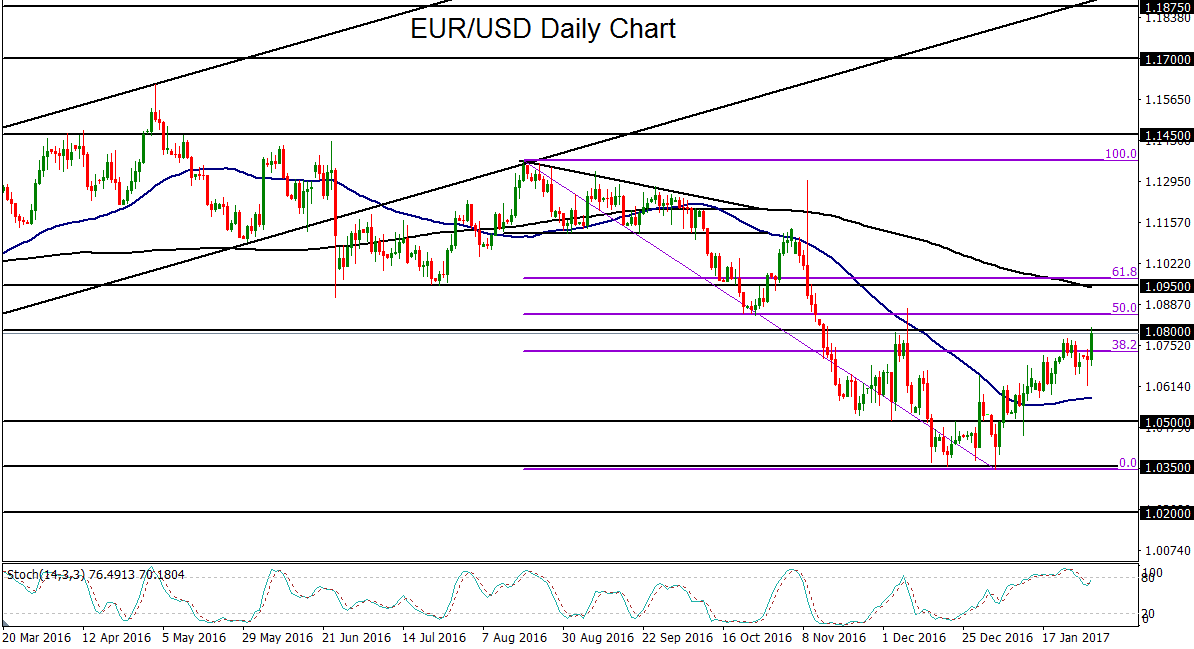