<p>Markets have predictably calmed down this afternoon as European traders clock out and US traders enjoy their President’s Day holidays, giving us a good opportunity to reevaluate the prospects for the world’s most widely-traded currency pair, EUR/USD. </p>

Markets have predictably calmed down this afternoon as European traders clock out and US traders enjoy their President’s Day holidays, giving us a good opportunity to reevaluate the prospects for the world’s most widely-traded currency pair, EUR/USD.

After exploding out of the previous 8-week range from roughly 1.0750 to 1.1050, EUR/USD surged all the way up to nearly 1.14 last week before rolling over the last two trading days to drop back to 1.1150 as of writing. It’s worth noting that the pair has already reached its high base target objective (the 300-pip range projected upward from 1.1050 = 1.1350), so the current pullback is not surprising. That said, the weight of the technical evidence still points higher as long as rates hold above previous-resistance-turned-support at 1.1050, as both the MACD and RSI are still in bullish ranges, despite the near-term dip.

The more interesting developments in EUR/USD this week may come from the fundamental side. Later this week, the German Federal Constitutional Court will hear arguments over whether the ECB’s Outright Monetary Transaction (OMT) program. The German court is widely expected to follow the lead of the European Court of Justice, which recently ruled that the program is constitutional, but an adverse ruling could raise questions about the ECB’s latitude for nontraditional monetary policy moving forward.

Beyond that under-the-radar tail risk, EUR/USD will also see its fair share of traditional economic data, including the ZEW EU Economic Sentiment report (tomorrow, expected at 10.3 from 22.7 last month), US PPI (Wednesday, expected at -0.2% m/m), FOMC minutes (Wednesday), US Philly Fed Manufacturing index (Thursday, expected at -2.9 from -3.5 last month) and US CPI (Friday, expected at -0.1% from the same reading last month). Though additional information from the world’s most important central bank would usually demand top-tier billing for traders, this week’s minutes may be unusually stale given the recent market volatility and last week’s update from Fed Chair Janet Yellen. 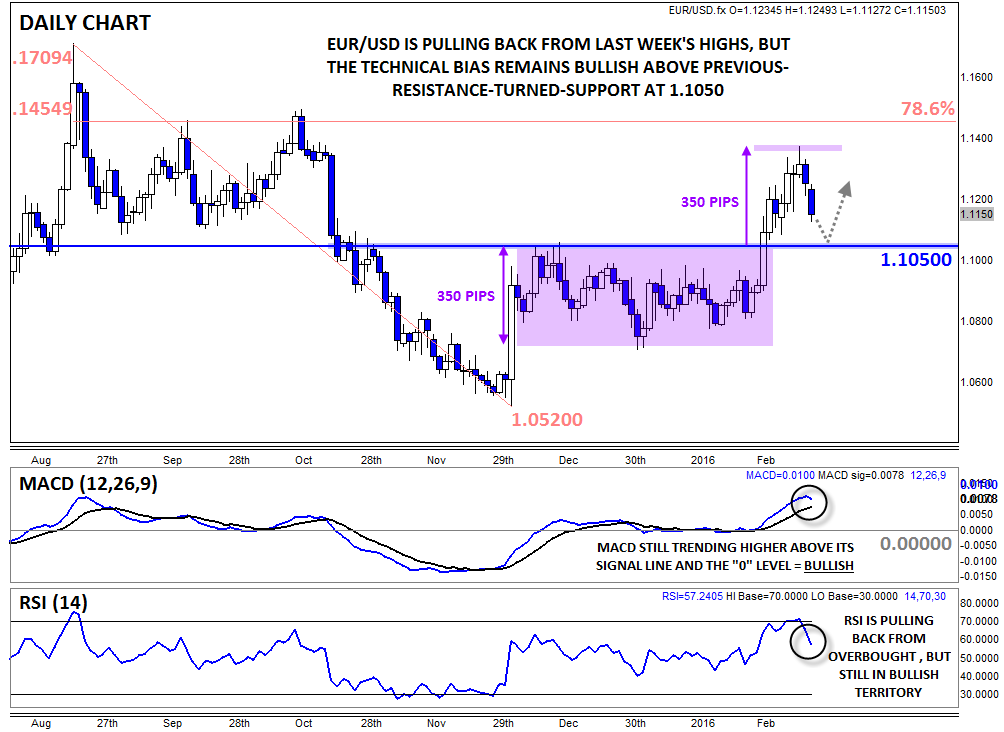