EUR/USD tests key level as Eurozone climbs out of deflation

Inflation in the Eurozone moved in the positive territory after spending no less than four straights months below zero. According to the Eurostat, the headline ‘flash’ Consumer Price Index (CPI) measure of inflation rose 0.1 per cent in June from -0.1% in May on a year-over-year basis. Core CPI was up 0.9% versus 0.8% previously. Both measures topped expectations by 0.1 percentage points. There was good news from Germany, too, as the rate of unemployment remained at a record low level of 6.1% after the number of unemployed fell by a larger-than-expected 6,000 in May. What’s more, German retail sales climbed 0.9% in May when a drop of 0.7% was expected, while the decline in April was revised favourably to -0.3% from -0.9%. In France however, consumer spending declined for the second consecutive month in May, this time by a larger than forecast 0.7% (vs. 0.1% expected).

Still, the EUR/USD seemed to respond well to the mostly euro-positive news as the world’s most heavily-traded pair climbed to a session high so far of 1.1135 ahead of US data in the afternoon (weekly unemployment claims and Chicago PMI). At the time of this writing, the EUR/USD was therefore testing the liquidity zone at the upper end of a key resistance area in the 1.1100-1.1135 range. As can be seen on the daily chart, below, this area marks the convergence of prior support with the 200-day moving average and 38.2% Fibonacci retracement against the Brexit-driven high of 1.1425.

If the EUR/USD turns lower from here then price could potentially drop sharply for there is little short-term reference points to watch until Friday’s low at 1.0910/15 area. However if it breaks higher then it may rise to at least test the backside of the broken medium-term bullish trend line, prior support at 1.1190 or the next key resistance area around 1.1230-40 (where the 61.8% Fibonacci retracement meets another old support level).

Given the break of the bullish trend line and bearish price action – lower highs and lower lows – we expect the potential break down to offer a more exaggerated move than a break higher. But the RSI’s positive divergence and the flattening of the 200-day moving average, plus the fact that the last sell-off bounced off the 61.8% Fibonacci support means the bearish trend is not too convincing at this stage. Indeed, with price action stuck inside a long-term range of about 1.05 to 1.15, one should be wary that the EUR/USD is not trending from a longer term point of view and that it is possible we may already have seen a low last year. Therefore, it may pay to be patient and let price dictate direction on the smaller time frames before pulling the trigger. 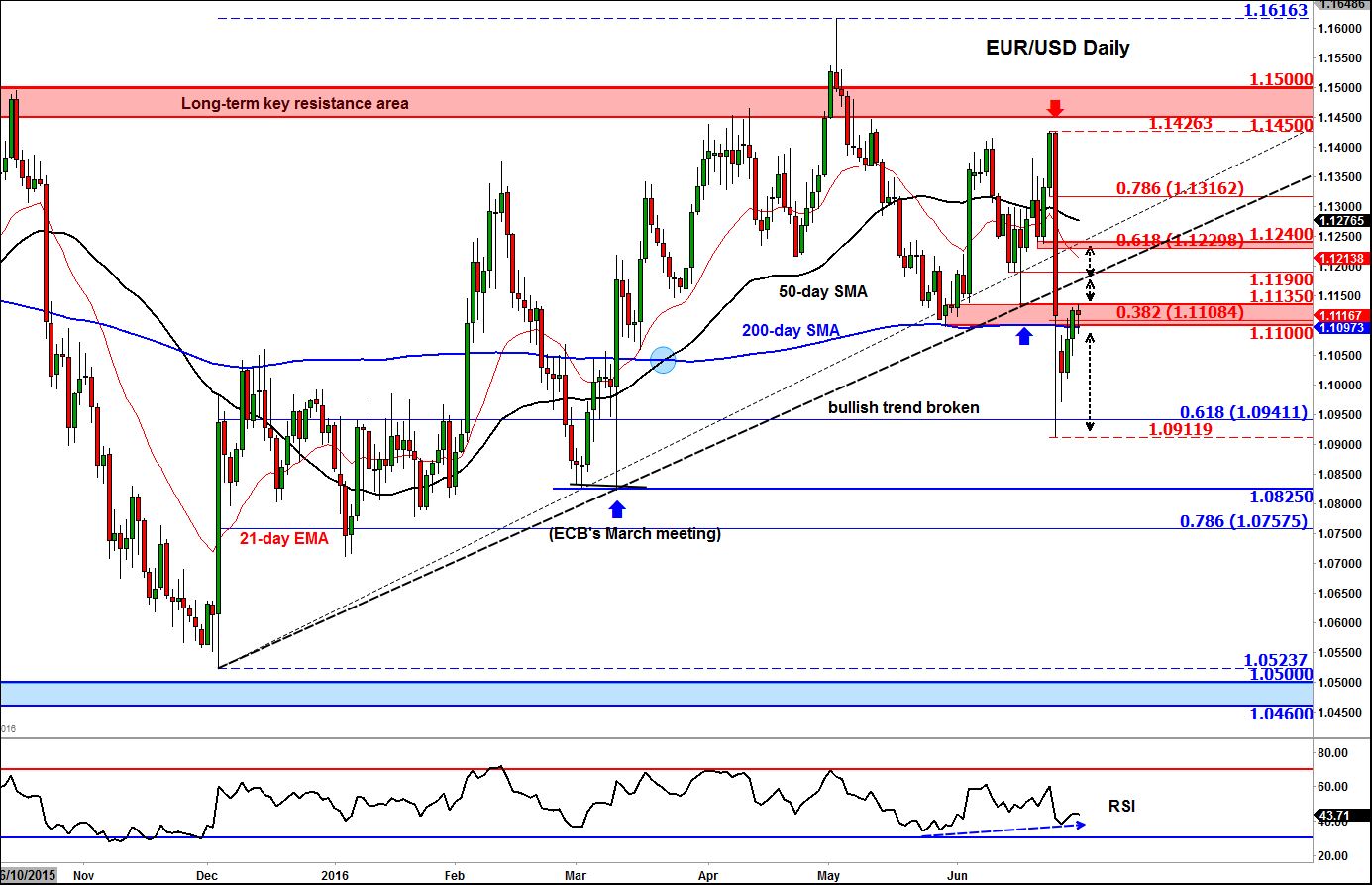