EUR/CAD in focus amid ECB, US tariff plans and Canadian jobs data

After the ECB’s dovish press conference the euro fell across the board, even against the Canadian dollar.

After the ECB’s dovish press conference the euro fell across the board, even against the Canadian dollar. The commodity currency has taken a beating of its own in recent weeks amid fears over protectionist US policies, renewed weakness in oil prices and soft domestic data. US President Donald Trump announced plans to impose hefty import tariffs on metals, which triggered threats of retaliation from around the globe including Mexico, Canada and European Union. Trump’s economic advisor then resigned, further fuelling concerns that Trump will press ahead with his plans. However, the White House has stated that Canada and Mexico may be exempt from the tariffs. If Canada is indeed exempt then the beleaguered currency could bounce back ahead of tomorrow jobs data, which will be released at the same time as the US non-farm payrolls report.  The US President is set to provide details of the tariffs at 15:30 ET today.

So, the Canadian and US dollars will remain in focus today, among the major currencies. But with the US dollar rising against its European rivals today, the Canadian dollar’s strength or lack thereof will become more apparent when paring it against another currency. Given the dovish ECB today, the EUR/CAD could be a good pair to watch for signs of strength for the Loonie, as we take the US dollar out of the equation.

In fact, the EUR/CAD has potentially formed a reversal price pattern when it rallied hard into the previous swing point and the 2016 high of 1.6105 yesterday but failed to close there. With the momentum indicator RSI also being at overbought levels and given the abovementioned macro considerations, then the EUR/CAD may now stage a pullback in what has been a strong bullish trend, especially if support at 1.5915 breaks now. If so, we could see a pullback towards the next support at 1.5665 in the coming days.

However, if the EUR/CAD goes back above the 1.5970-1.6000 resistance range then the bears may get in trouble again and we may see a subsequent break to a new high for the year. The next bullish objective beyond the aforementioned 1.6105 level is at 1.6205 – a 161.8% Fibonacci extension level, derived from a previous price swing. 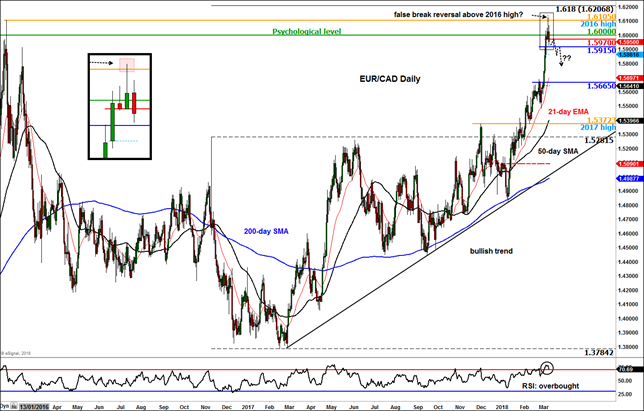