EUR/CHF breaks out ahead of SNB

The prospects of a prolonged period of negative interest rates in Switzerland could limit the upside for the Swiss franc. With the EUR/USD teasing the November high of 1.13 ahead of the FOMC decision today and USD/CHF holding relatively higher from its corresponding level of 0.9550, the EUR is thus slightly stronger than the CHF. This makes the EUR/CHF technically bullish. Indeed, with the ECB coming under increasing pressure to begin tapering QE, the EUR/CHF could rise further, especially if the SNB continues to remain extremely dovish.

In fact, the EUR/CHF has broken above its short-term corrective trend today after spending more than a month in consolidation following its recent rally. With the EUR/CHF ending its corrective phase, it may have started its next expansionary phase. Given this technical development we are expecting the cross to push higher in the days and possibly weeks to come. At this stage, this bullish outlook would become invalid if price were to fall back below 1.0840. Some of the key levels to watch going forward are shown on the chart. 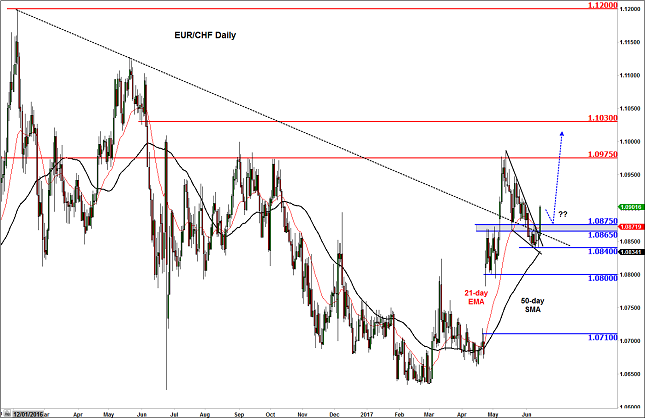