Headline Consumer Price Index (CPI) measure of inflation printed 2.3% year-over-year in February, up sharply from 1.8% in January and surpassing expectations for a 2.1% print. Core CPI hit 2.0%, while the retail price index (RPI) jumped to 3.2%. Other measures of inflation were mixed. Overall, though, the data was very strong.
"We shouldn't focus on one data point" said the Bank of England Governor Mark Carney in reaction to today’s surprisingly strong UK inflation figures for the month of February.  Despite Carney’s warning, the market will force the BoE’s hand and demand a rate rise if incoming inflation data continues to remain strong.
With the UK about to start the formal process of exiting the EU, uncertainty surrounding the future of the UK is diminishing somewhat, albeit from a very high level. And with the pound spending several months around 1.20-1.25 against the US dollar, without falling further, one could argue that most of the bad news may already be baked in the price. So, the pound may be able to regain its poise. But with the US dollar remaining fundamentally strong due to a hawkish central bank, even if the greenback has fallen sharply in the past week and half, the pound’s strength may become more apparent against, for example, the euro. With French elections just a month away, rising political risks may undermine confidence in the euro, even if inflation in the single currency bloc has also started to rise. Thus the EUR/GBP may ease further in the coming months, and could potentially drop significantly if anti-establishment right wing National Front party wins the election.

From a technical perspective, the EUR/GBP may be in the process of forming a complex Head and Shoulders reversal formation. It has now failed twice to break the key resistance zone above the 0.8780 area, the second attempt resulting in a lower high. So it could be forming the right shoulder here. But the cross still remains well above the neckline and key support area of 0.8300-8340 and also above the still-rising 200-day moving average (0.8550/5), which objectively tells us that the long-term trend is bullish. However will it now head decisively lower? To have any chance of doing that, it will first need to break below short-term support levels at 0.8645 and 0.8590, levels which were formerly resistance. 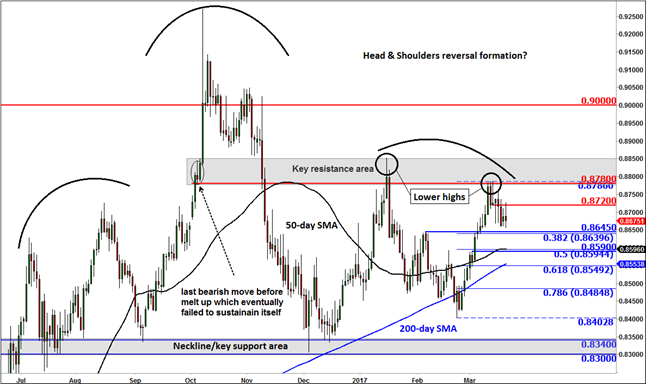