Due to the inequality of the cuts, GBP should move lower at a faster pace than the Euro.

Earlier today, we asked the question: ‘When will Japan Act?” on providing additional stimulus in the face of the coronavirus plaguing the economy, with the Reserve Bank of Australia (RBA), the Bank of Canada (BOC) and US Federal Reserve (FED) already doing so.  Currently, members of the Bank of Japan (BOJ) see no need to act, however if USD/JPY fell sharply through 105.00, members would take a look.  The next BOJ meeting isn’t until March 18th.

If we look at the Bank if England (BOE), they are in the mist of handing over the reins, as new Bank of England Governor Andrew Bailey takes over for current Governor Mark Carney on March 16th.  However, a week before then, on March 11th,  the UK will present its 2020 Spring Budget.  The BOE’s Monetary Policy Committee (MPC) doesn’t meet until March 26th.  Yesterday, Bailey sad the BOE and the Treasury will work together to provide financial support to companies affected by the coronavirus.  On January 20th, the BOE held rates at 0.75%.  Expectations are for the MPC to cut rates by 25bps on March 26th.  Could it come earlier?  Of course, it can!

Let’s take a look at the other side of the recently divorced couple, the European Union (EU).  The European Central Bank (ECB) currently has rates at -0.50%!! Their next meeting is March 12th, a day after the UK’s spring budget report.  On Monday, ECB President Christine Lagarde said the ECB will act if needed to support the Euro Area as the coronavirus creates economic risks.  The market is expecting -10bps at the March 12th meeting.  But how much more can the ECB cut and what affect would it have?  Italy plans to set aside over $8 Billion to help business who are dealing with the fallout of the coronavirus.  More fiscal stimulus needs to be done.

As we have discussed, when stock markets around the world began to sell off, the carry trade began to unwind.  As a result, the Euro began moving higher.  EUR/GBP put in a double bottom on a daily timeframe at .8270 and on February 28th, price broke higher through the neckline of the double bottom setting up a target of near .8950.  The pair continued to trade higher and halted at the 200 Day Moving Average before pulling back to today’s lows near .8620.  This gave a chance for the overbought RSI to unwind.  Resistance is at the 200 Day Moving Average near .8680, horizontal resistance and the 50% retracement from the August 18th, 2019 highs to the February 18th lows, near .8900, and the 61.8% Fibonacci retracement level near the double bottom target at .8930/50. 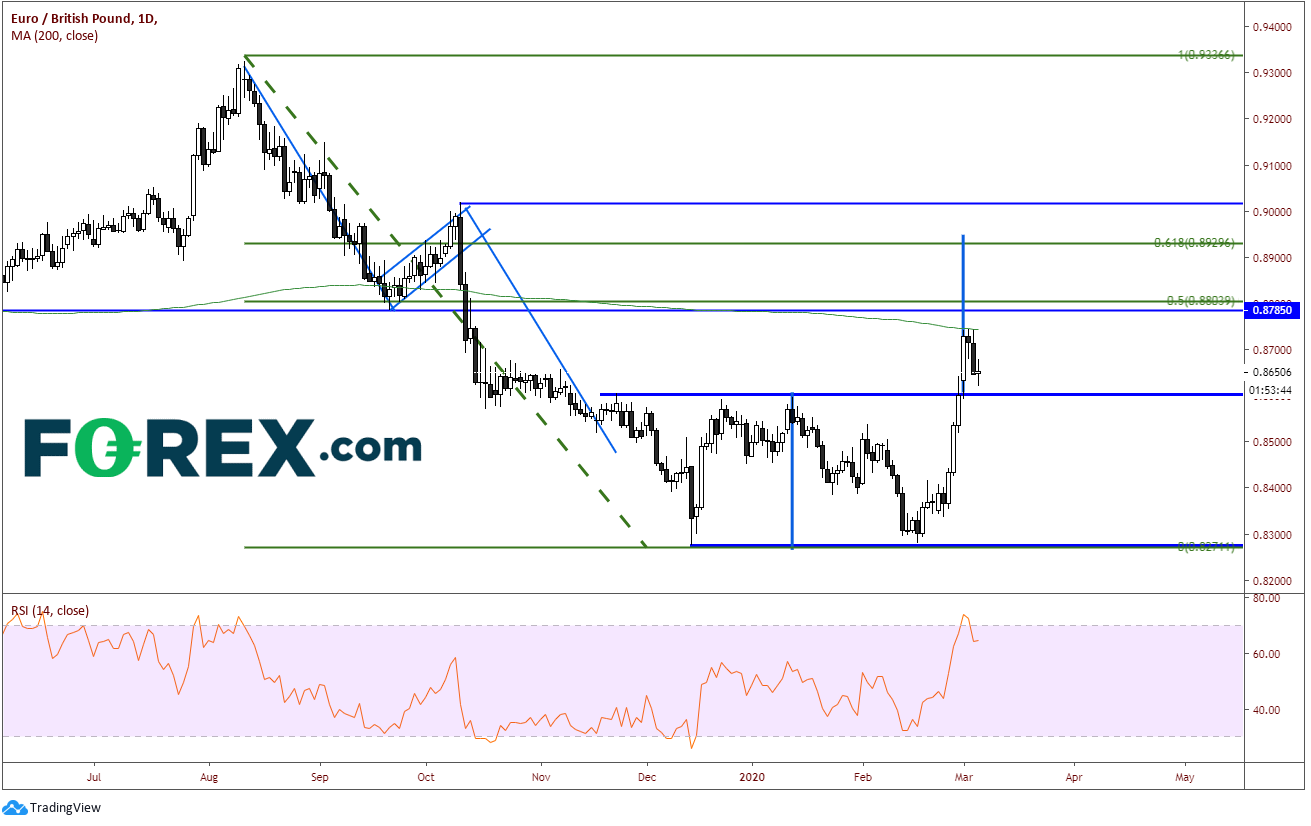