This morning’s data from Europe has been mixed: UK’s inflation figures were surprisingly strong, while a key German economic sentiment survey came in significantly weaker and Eurozone’s construction output shrunk more than expected. Yet, the EUR/GBP has so far been able to hold its own pretty well. It is no secret that many speculators anticipate that the recent growth in divergence between the Eurozone and UK monetary policies to narrow, thereby reducing the appeal of the pound on a relative basis. While the European Central Bank is unlikely to further loosen its policy in the near-term – indeed, nothing significant is expected to be announced at its next meeting on Thursday – the Bank of England has hinted that it may ease its policy aggressively at its August meeting. Having dropped big figures in the aftermath of the Brexit vote, the pound has already extended its declines on the back of BoE speculation. But it is difficult to see how much further the pound could fall (or the EUR/GBP climb), even if the BoE were to ease its policy next month. In the short-term therefore, the EUR/GBP could start to head lower from these severally ‘overbought’ levels, certainly if the ECB were to deliver a dovish surprise on Thursday, or if the upcoming data releases from the UK were to confound expectations again.

That’s exactly what happened this morning with inflations figures, not that they had any lasting impact on the pound. The Consumer Price Index (CPI) rose to 0.5% year-over-year in June compared to 0.3% in May and 0.4% expected. This was the highest level since November 2014. Given that the data was collected before the June 23 referendum, many analysts and traders quickly shrugged it off. But other measures of inflation were also strong and the sharp drop in the pound means import prices will have risen further since the Brexit vote, which could be passed onto the consumer. This will pose a dilemma for policymakers at the Bank of England, who clearly feel the need to loosen policy but with inflation potentially set to rise further, they may have second thoughts about it. This view could gain more strength if jobs, wages and retail sales figures set for release in the next couple of days also beat expectations.

The EUR/GBP could start to head lower now that it has broken back below the psychologically-important 0.85 level, which had acted as support for several days in recent past. The selling pressure could really begin to accelerate if support at 0.8335 now gives way. If seen, a drop towards the support trend of the bullish channel could be a real possibility, with additional supports shown on the chart in blue. However, if short-term resistance at 0.8415 breaks first then a revisit of 0.8500 level would then become highly likely. The slightly longer-term technical outlook will depend on whether the EUR/GBP will climb back above 0.8500 or break outside of its bullish channel. 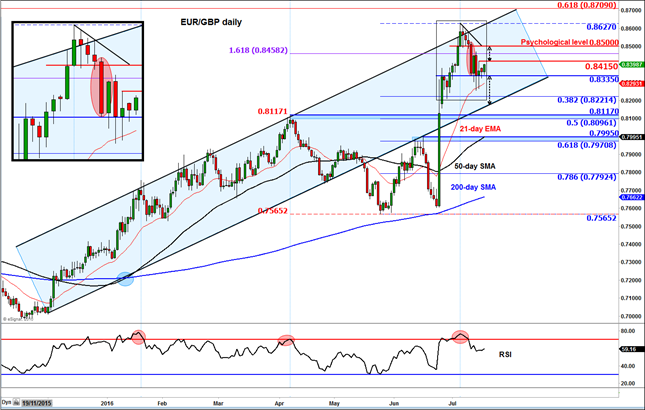