This morning we had data from both the UK and Eurozone, while the Bank of England governor Mark Carney was speaking to a committee of MPs on UK inflation and growth outlook, and his future at the bank. The end result was a sharp oversold bounce for the EUR/GBP, which climbed for a time to above the 0.87 handle. Despite the recovery, my short-term outlook on this pair remains bearish and think it is on course to drop to 0.85 in the coming days or weeks as traders respond to the prospects of higher rates of inflation in the UK.

This morning we had data from both the UK and Eurozone, while the Bank of England governor Mark Carney was speaking to a committee of MPs on UK inflation and growth outlook, and his future at the bank. The end result was a sharp oversold bounce for the EUR/GBP, which climbed for a time to above the 0.87 handle. Despite the recovery, my short-term outlook on this pair remains bearish and think it is on course to drop to 0.85 in the coming days or weeks as traders respond to the prospects of higher rates of inflation in the UK. Indeed, due to the significantly weaker pound, input costs for producers rose sharply last month, though luckily for the consumer, factories absorbed most of those costs and only passed on some of the price increases. So it was more a case of disinflation rather than inflation when it came to consumer prices in October.

Don’t be fooled by the CPI miss

Once existing inventories end that is when we will unfortunately see the rising import costs passed on to the consumer in a meaningful way. So, don’t be fooled by the supposed drop in inflation as indicated by the headline CPI, which according to the ONS, unexpectedly eased to 0.9% year-over-year from 1.0% in September. Core CPI was also weaker at 1.2% versus 1.5% the month before. But the Producer Price Index (PPI) showed very different picture. PPI input prices rose by a large 4.6% month-over-month due to the weaker pound. Factories absorbed much of that rise as PPI output rose 'only' by 0.6% on the month.

Mark Carney echoed that sentiment. He said that UK inflation was lower last month mainly due to short-term effects in the clothing market. However, he thinks that inflation will accelerate in the coming months as the weaker pound underpins the price of imported goods. According to Carney, the Bank of England will tolerate the higher rates of inflation, though there is no ‘precise number’ on this. Carney says it will depend on the reasons why inflation is rising and whether the public’s expectations about price levels have been impacted. This may be why the pound was unable to stage a quick comeback as traders realised that the prospects of tighter monetary policy as a result of rising inflation is... well, non-existent for the foreseeable future.

Meanwhile the Eurozone economy grew at a 0.3% pace in the third quarter as had been widely expected. But today’s other economic pointers were better than expected. For one, the trade surplus in the single currency area surged to €26.5bn in September from €18.4bn the previous month as exports accelerated while imports declined. What’s more, the German ZEW Economic Sentiment came out higher than anticipated: it printed 13.8 versus 7.9 expected and 6.2 last.

As a result of the abovementioned fundamental reasons, the EUR/GBP jumped as the pound slumped. The cross rose to test the prior reference point around the 0.87 handle or specifically the 0.8690-8720 area before drifting back lower. However with short-term resistance at 0.8635 broken, we may see a more pronounced recovery before the downward trend probably resumes. Specifically, the area around 0.8850/60 is where I am expecting this to occur, should we get there in the first place. Here, the prior support meets the 61.8% Fibonacci level and the resistance trend of the bearish channel. In the event that the sellers do not show up there then that will invalidate our still-bearish bias. Meanwhile if and when support at 0.8635 breaks and we print a new low below 0.8565/70 level then this will likely pave the way for 0.85 or even lower. 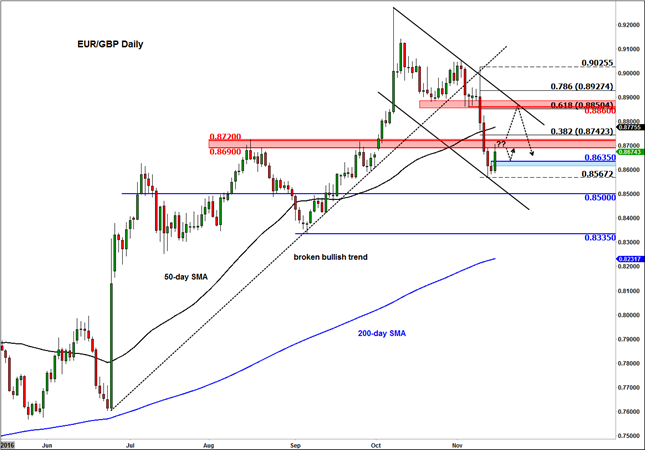