EUR/GBP: Levels to Watch Through a Critical Week

We’ve already written extensively about the high stakes for Tuesday’s vote on Theresa May’s Brexit bill (see here, here, and here for more), but with EUR/GBP clocking in as the weakest currency pair on the day, we also wanted to highlight key levels to watch on the second most-traded pound cross.

We’ve already written extensively about the high stakes for Tuesday’s vote on Theresa May’s Brexit bill (see here, here, and here for more), but with EUR/GBP clocking in as the weakest currency pair on the day, we also wanted to highlight key levels to watch on the second most-traded pound cross.

As the chart below shows, EUR/GBP hasn’t been able to form a meaningful trend of late, with rates mostly consolidating in the broad 0.8650-0.9100 range for over 15 months now. Given the three rejections off the 0.9100 handle in the last five months, we would expect that level to provide strong resistance on rallies in the coming week and beyond. In other words, traders will likely increase their selling pressure if and when EUR/GBP nears 0.9100, so it will likely take a strong EUR-bullish or GBP-bearish (no deal Brexit?) catalyst to push the pair above that barrier.

Meanwhile, the unit is now testing its lowest price in over a month in the 0.8930 area, a zone that also served as previous resistance. If that near-term support level gives way, EUR/GBP could see a continuation down toward the late November low around 0.8810, with little in the way of previous support below there until the range bottom at 0.8650.

While it will be difficult to handicap developments out of Parliament, Downing Street, and Brussels in the days and weeks to come, EUR/GBP traders should keep a close eye on these four levels when planning their entries and exits. 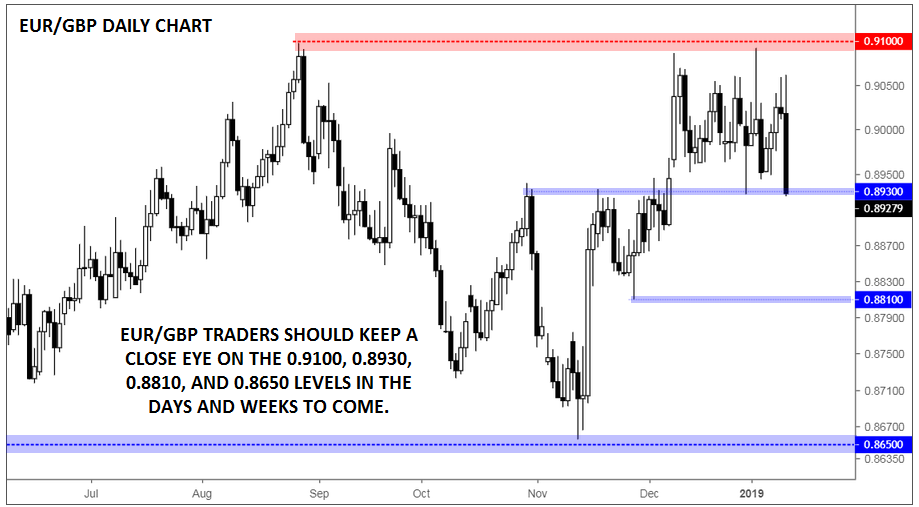