It’s been a quiet start for traditional economic data, with a slight miss in US existing home sales the only headline of note...

It’s been a quiet start for traditional economic data, with a slight miss in US existing home sales the only headline of note. That situation is likely to change as we move through the week though, with tomorrow’s European Manufacturing and Services PMI reports providing an up-to-date read on the Eurozone economy. For reference, economists are expecting a 54.7 reading on the Manufacturing PMI report and a 55.0 reading on the Services front, roughly in-line with last months’ readings.

While EUR/USD remains smack dab in the middle of its well-trodden 2.5-month range, EUR/GBP has shown a big more volatility of late and could be the more interesting pair to watch tomorrow morning. Since bottoming near 0.8620 in mid-April, the European cross has formed a broad bullish channel. As of writing, the pair is testing the top of that channel, near the year-to-date high at 0.8970 with additional levels of resistance stretching up to 0.9030: 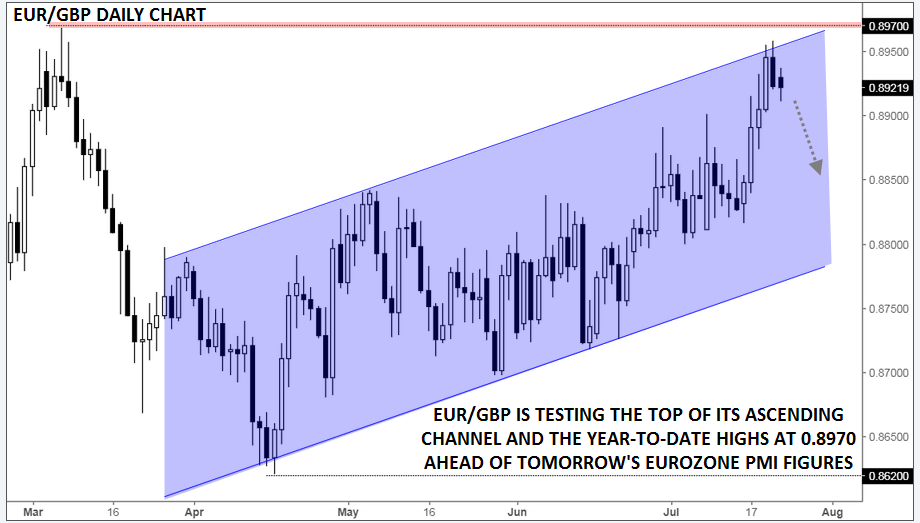 With rates near two potential sources of resistance, a weak set of PMI reports may prompt EUR/GBP bulls to bank some of their profits from the last week, potentially taking the pair back down toward the middle of the channel near 0.8850 or even the bottom around 0.8800.

Given the strong technical resistance above current rates, even a strong set of reports may not be enough to prompt the pair to break out; instead, EUR/GBP bulls may be crossing their fingers for some negative geopolitical news out of the UK as a possible bullish catalyst. If the pair is able to break conclusively back above 0.9030, an eventual continuation toward the 2017 high near 0.9300 could come into play.