EUR/JPY: Eurozone inflation back at 2%

Inflation has made a dramatic return in the Eurozone. In February, the headline CPI measure rose to 2.0% year-over-year, accelerating from 1.8% in January. For the third consecutive month, this was higher than expected. Meanwhile core CPI was unchanged at 0.9%, in line with the expectations. Also unchanged was the rate of unemployment. At 9.6%, the Eurozone unemployment rate is one of the highest across the developed regions. If it wasn’t for the high unemployment, the ECB would have surely at the very least ended its QE stimulus programme by now.

Inflation has made a dramatic return in the Eurozone. In February, the headline CPI measure rose to 2.0% year-over-year, accelerating from 1.8% in January. For the third consecutive month, this was higher than expected. Meanwhile core CPI was unchanged at 0.9%, in line with the expectations. Also unchanged was the rate of unemployment. At 9.6%, the Eurozone unemployment rate is one of the highest across the developed regions. If it wasn’t for the high unemployment, the ECB would have surely at the very least ended its QE stimulus programme by now. But Mario Draghi has previously indicated that the central bank will tolerate a temporary rise in inflation above the 2.0% target. But what if this is not a temporary rise? What if inflation accelerates to 3.0% in the coming months? Whichever way you look at it, the pressure is growing on the ECB to tighten its belt. Consequently, the euro may start to outperform against its weaker peers. That being said, political risk is growing ahead of the upcoming elections in Netherlands and France. This may weigh on investors’ appetite to buy euros in a meaningful way.

But if the euro has any chance of making a decent comeback it will most likely be against weaker rivals and especially those where the central bank is still dovish. With US equities rallying like there’s no tomorrow, investors’ appetite for risk is high. Thus you’d think that demand for the perceived safe-haven currencies such as the Japanese yen should be low. As a result, the EUR/JPY could be best positioned to take advantage of a euro recovery in these market conditions. However if risk appetite turns sour then this pair could be in for a deeper correction before it potentially start its next major up leg.

But the EUR/JPY’s long-term bearish trend technically ended towards the end of last year when it broke above its well established downward sloping trend line. The rally subsequently came to a halt around the 123 mid-point and cross has subsequently been in a corrective trend since the start of the year. However, in recent days we have seen a bullish breakout from the falling wedge patter after key support at 118.40 held firm. Ideally, we would have preferred to see a deeper retracement to say the 61.8% Fibonacci level at 115.00 before the uptrend resumed. However it has found support at 38.2% Fibonacci level, which is much shallow. There are two ways you could interpret this. First, the 38.2% is a shallow retracement and thus suggest that if the high at 123/124 eventually breaks then one can expect a sizeable range expansion then. But we are still miles away from the 123/124 area and a lot could go wrong in between. The second interpretation is that this could prove to be a temporary low. Lots of sell stops from bullish positions will likely be stacked below the 118.40 level, which could pull price towards it. Thus we may see a temporary breakdown at some point down the line before price turns around at another support level such as the bullish trend line, the 200-day average or that 61.8% Fibonacci retracement.

So how should one proceed with the EUR/JPY? Well the bulls should do so with care until price breaks 123/124 range. The bears may wish to pick their spots well and after some confirmation because they know full well that this pair could easily take off given the long-term technical damage for this group of market participants. In terms of levels, the bulls will now want to see the broken 119.30-50 area hold as support. The bears better hold resistance in the 12.55-80 area, otherwise we could see a squeeze towards the top of the recent range in the coming days. For avoidance of doubt, this is our base case scenario. 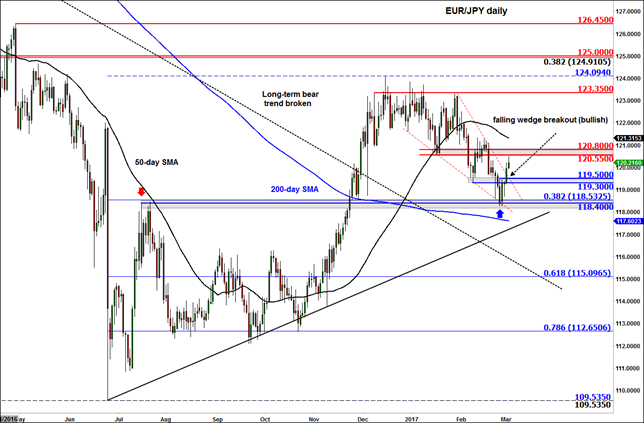