EUR/JPY: one to watch if risk aversion rises

In fact, the EUR/JPY has already retreated somewhat from key resistance and psychological level of 120.00 this week. As a result, the long-term bearish trend line has remained intact for the time being. However, the losses have so far been contained with the 200-day moving average at 118.60 providing decent support thus far today. Therefore, one can say that the EUR/JPY is stuck between a rock and a hard place. A move below the moving average would tip the balance in the favour of the sellers, while a break above 120.00 would be bullish. But with the RSI being near the ‘overbought’ threshold of 70, a short-term pullback here may actually be a healthy move as far as the recent bullish trend is concerned.

Within this 118.60-120.00 range an interesting area to watch is around 119.30-119.55, the distance between Monday’s open and low, which was taken out after Tuesday’s sell-off. If the trend is turning bearish then the sellers will need to defend this area today.

The recent break higher may mean that the EUR/JPY has found a long-term base and that a pullback here may just be that, a pullback inside a rising trend. So the bears need to proceed with the mentality of a sniper: one shot, one kill and lots of patience. There are lots of potential support levels to watch on the way down. Below the 200-day is the prior resistances at 118.40, followed by 117.15 and then at 116.35. The potential pullback could end at any one of these levels.

The bulls meanwhile will want to see the overbought conditions unwind either through price or time (more favourable). In any case, a potential break above 120.00 would probably mark the resumption of the upward trend, in which case the immediate focus will then turn to the next point of reference at 122.00: the last high prior to the down move in July. 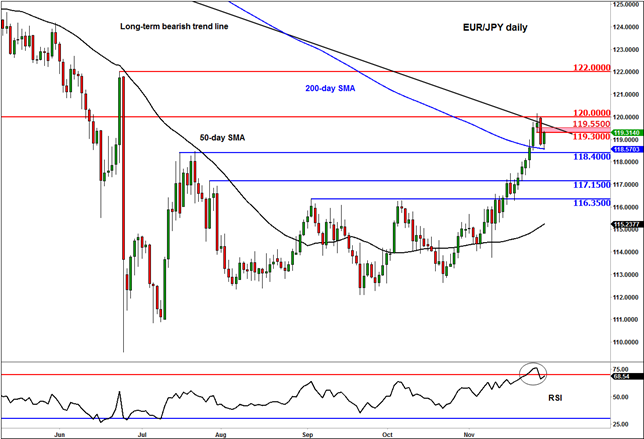