EUR/USD at key level ahead of important week

The EUR/USD’s sell-off accelerated last week, although it remains to be seen if it will go any further lower or stage a comeback this week.

The EUR/USD’s sell-off accelerated last week, although it remains to be seen if it will go any further lower or stage a comeback this week. Last week’s sell-off was mainly due to the rebounding US dollar than weakness in the euro. However, the latter also weakened slightly because of a slightly dovish ECB than expected. We are certainly not ruling out anything in terms of what might happen to the EUR/USD exchange rate this week. After all, there will be at least two key fundamental events that could impact its near-term direction: the FOMC’s latest policy decision on Wednesday and the US monthly jobs report on Friday. If either of these cause the dollar to weaken then surely the EUR/USD will bounce back, while the prospects of a hawkish surprise or stronger-than-expected data could have the opposite impact. In addition, there will be plenty of other second-tier economic data from both regions released throughout the week, while the deadline for when an exemption expires for US tariffs on steel and aluminium is fast approaching on May 1. The latter could also impact both the euro and the dollar, depending on the progress of trade negotiations or lack thereof.

As far as today is concerned, the euro hasn’t been helped at all by further weakness in German data released earlier. This time it was retail sales which unexpectedly fell 0.6% in the month of March instead of rising 0.8%. But one always has to see incoming Eurozone data through the eyes of the ECB. In this regard, the central bank has so far dismissed the softness in German data as being due to temporary factors. So, if the ECB are correct then we should see improvement in data in the months ahead. Otherwise the euro will start responding more sensitively to further weakness in economic numbers as the market questions the central bank’s predictions and therefore the prospects of stimulus withdrawal at the end of the year. Meanwhile German CPI was flat in April after climbing 0.4% in March. The April reading was better than a drop of 0.1% expected.

Ahead of this week’s upcoming fundamental events, the EUR/USD has entered into a key technical area between the 1.20 and 1.21 handles. As can be seen on the daily chart, this is where the previous resistance, last year’s high and the 200-day moving average all come together. The EUR/USD already bounced from here on Friday, but so far in today’s session there hasn’t been any further follow-through. If the euro fails to stage a more significant bounce at this key support area in the coming days then this will increase the chances for a breakdown. However, given that the long-term trend for the EUR/USD has been bullish since the start of 2017, we are actually on the lookout for price to potential form a base here and push higher again. In the event the EUR/USD does bounce back and eventually goes back above Friday’s high then this would increase the likelihood for a return towards the 1.2300 resistance with intermediate hurdles seen at 1.2155 and 1.2210. But if the 1.20 handle breaks and there is acceptance below this level then we could soon be talking about mid-to-high teens for the EUR/USD. 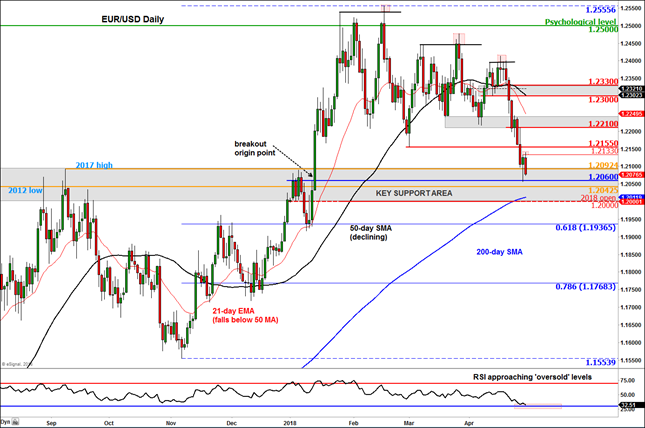