Euro at lofty levels ahead of ECB meeting and EU Summit: EUR/USD, DXY

With the ECB meeting and EU Summit, there is the potential for profit taking in the Euro

The ECB meeting and the first day of the EU Summit are both on Thursday.  The ECB has already signaled that they are willing to extend the Pandemic Emergency Purchase Program (PEPP) until as late as mid-2022 and increase bond buy by a possible 500 million Euros.  They may even cut interest rates below the current minus 50bps!  The EU will be trying to persuade Poland and Hungary to pull their vetoes to the seven-year budget, which includes 750 billion Euros for coronavirus aid. With the possibility of all this stimulus the, EUR/USD is still at its highest levels since April 2018! The reason, though, has more to due with the US Dollar than with the Euro.

On December 1st, EUR/USD broke higher out of a double bottom formation and about the September highs of 1.2014.  The target for the breakout of a double bottom is the height of the pattern added to the breakout point, which is near 1.2400.  However, the pair is stalling at the 78.6% Fibonacci retracement from the early 2018 highs to the March 23rd lows, as well as the 127.2% Fibonacci extension from the September 1st highs to the double bottom lows.  This resistance is near 1.2122 and 1.2175.  In addition, the RSI is in overbought territory, albeit moving lower at the cusp of neutral territory. 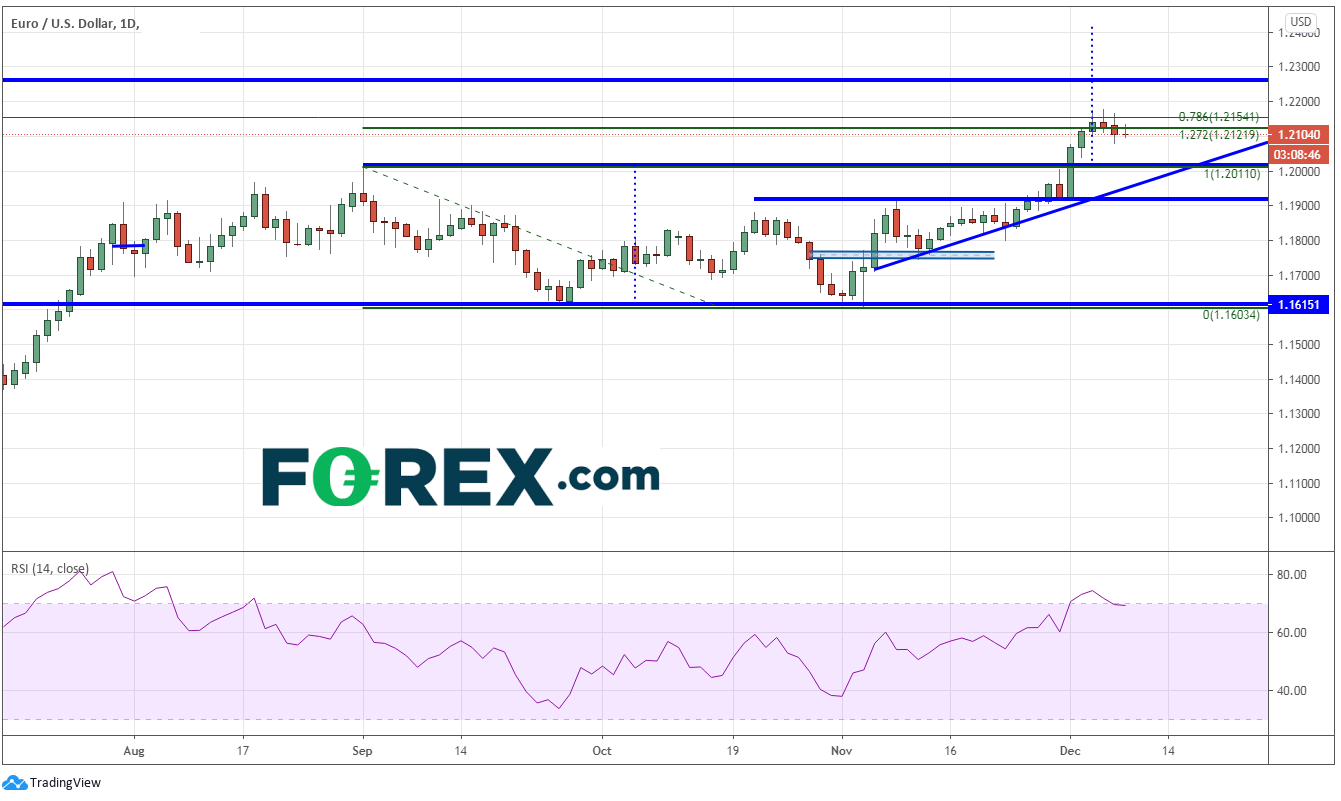 EUR/USD longs may be interested in taking some profits off the table ahead of Thursdays events. First level of horizontal support is 1.2078.  The next support level is the breakout of the double bottom formation, the upward sloping trendline from the November 4th lows and the psychological 1.2000 level.  The third level of support is horizontal support near 1.1922  Resistance is at recent highs near 1.2178 horizontal resistance from 2018 near 1.2260. 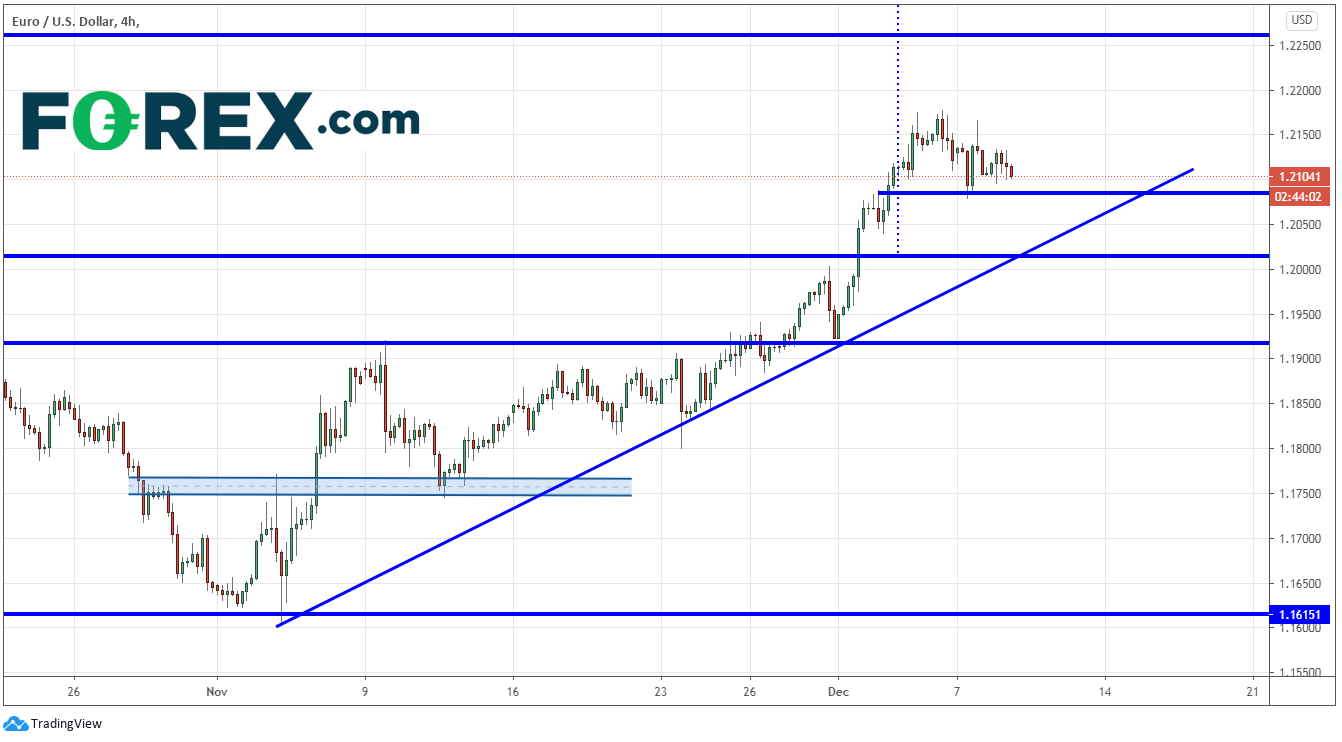 The US Dollar Index (DXY) has been trading opposite the EUR/USD.  With all the potential stimulus coming Europe’s way over the next few weeks, markets don’t seem to think its anything compared to what is coming to the US!   The FOMC meets next week, although the Fed is likely to hold off on any kind of increase in stimulus until they see what the government is going to offer.  However, whereas the EU is looking at a 750-billion-euro package, the US is look at a $1 trillion + fiscal package once Joe Biden takes over as President!  This is the main reason the US Dollar has been so weak compared to the Euro.

The US Dollar Index has been trading lower since the highs in late March when the pandemic began.  Price moved from near 103,00 on March 20th down to 90.47 on December 4th.  The DXY has moved into a strong support zone between 89.00 and 91.00 and has stalled.  The RSI on a daily timeframe is diverging from price, which indicates a possible reversal in price.  Horizontal resistance is at 91.74 and then an upward sloping trendline from 2011 near 92.50. 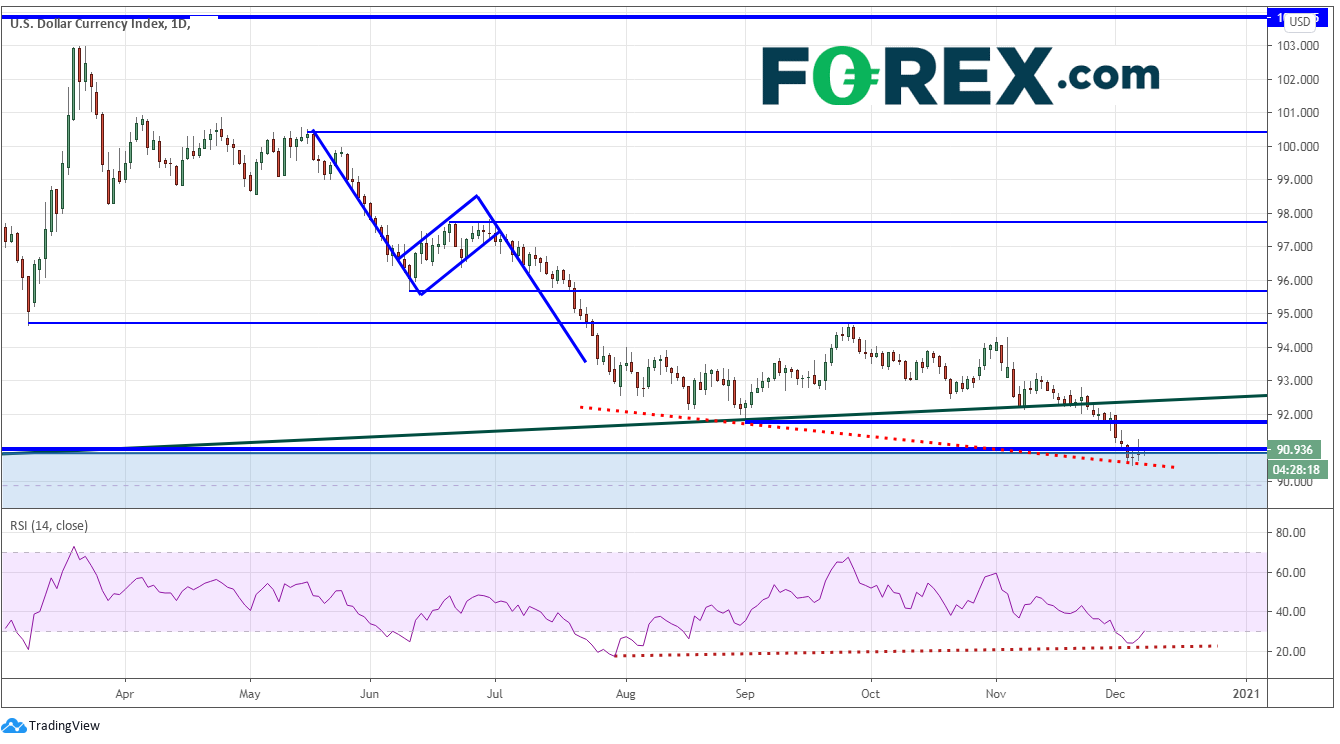 With the ECB meeting and EU Summit on Thursday, there is the potential for profit taking in the Euro. Watch for volatility in Euro pairs ahead of these events.