EUR/USD a step closer to parity

It looks like the dollar has resumed its long-term upward trend after a pause at the start of this week. The Federal Reserve looks set to raise interest rates in December before tightening its belt further in 2017. The FOMC’s last meeting minutes, due for release in about an hour from now, could shed some more light into this view. Incoming economic data generally supports a rate rise, with durable goods orders being among today’s forecasting-beating data. Meanwhile all the other major central banks are expected to remain dovish for the foreseeable future, not least the European Central Bank and the Bank of Japan. Consequently, the dollar could extend its rally significantly further against the euro and yen.

In fact, the EUR/USD is again looking very weak after the recent sell-off has paused for breath at the start of the week. But the US will be celebrating Thanksgiving on Thursday so it remains to be seen if the EUR/USD will sharply extend its declines further this week. Some may argue that a rate rise in December is basically priced in by now. However, it is what happens after December and if investors believe that the Fed will still be more hawkish then than the ECB, then we could actually see the EUR/USD drift further lower. I still think parity represents a fair value for the EUR/USD given the diverging paths of interest rates in the Eurozone and the US.  But it is not about what I think is fair value, it is about the markets. Indeed, we could even fall below parity, or who knows start a major up leg here. The point I am trying to make is no one knows what will happen next.

But that doesn’t prevent us from predicting what might happen. On balance, the EUR/USD still looks heavy and a breakdown appears more likely. After all, the weekly bullish trend line has been taken out now. Traders now need to watch price action closely around 1.0525 and 1.0460, levels where the EUR/USD had bounced back from in the past. In fact, the current low of today is at around 1.0525, so clearly some traders have used that level as a point of reference. But if support at 1.0525 gives way later on today or tomorrow then at least a revisit of the 2015 low at 1.0460 should be expected.

If eventually the 1.0460 level also gives way then there are not many prior reference points to watch until the next psychologically-important level of 1.00 (parity). There is however a Fibonacci cluster zone around 1.0175-1.0225 where we may see some profit-taking. That’s assuming we will get there in the first place. Indeed, for all we know, the EUR/USD could easily bottom out and stage a sharp rally. If it starts to climb back above the broken support at 1.0570 then the sellers will need to proceed a little more carefully. And if 1.0660, this week’s high, breaks, then that could see price stage a short-squeeze rally towards the next point of reference at 1.0850, the last low prior to the recent breakdown. 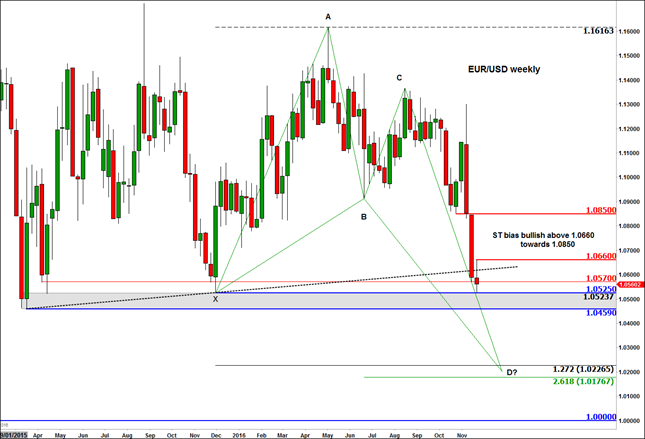