EUR/USD about to turn lower?

You may have noticed that I have been rather vocal about a potential comeback by the dollar in recent days. So far nothing significant has happened, but that could be about to change as the Dollar Index shows some signs of life around that important 100 level

You may have noticed that I have been rather vocal about a potential comeback by the dollar in recent days. So far nothing significant has happened, but that could be about to change as the Dollar Index shows some signs of life around that important 100 level, as I reported yesterday HERE. Correspondingly, the EUR/USD’s advance has been rejected on an intra-day basis around the 1.0770 level on several occasions now. So, is it time for King Dollar to return?

At the moment, the EUR/USD is basically stuck between a rock and hard place. So far the 1.0710/20 area has been defended after several attempts to break 1.0770 failed. The good news is that a breakout or breakdown is on the cards. The bad news is that at this stage, it is difficult to say which direction the breakout will be and that how far price will go once it does break out. But judging by the behaviour of price action in recent days, I am beginning to think that the EUR/USD will break to the downside. The big clue for me in this regard has been the false break and subsequent failures at or around the 1.0770 level (see the inset) and the corresponding price action on the Dollar Index around 100.

However, the bigger technical picture looks muddled. The refusal of the EUR/USD to hold below that long-term support in the 1.0460-1.0525 area suggests that the worst of the selling may be over for the euro. But even in the short-term outlook, none of the daily support levels have broken down yet. The key level as mentioned is around 1.0710/20, which was previously resistance. Until and unless this level breaks the bias for the EUR/USD remains neutral.

So there you have it: the key levels to watch on the EUR/USD are at 1.0770 on the upside and 1.0710/20 to the downside. If the support level gives way then it is reasonable to expect a sell-off towards that long-term pivotal area around 1.0460/1.0525 again with an interim support level coming in at 1.0630. Conversely, if the 1.0770 level breaks then there is little further resistance until 1.0850/70 area, which means it is reasonable in this scenario to expect a quick rally. But my base case is that the EUR/USD will break lower. 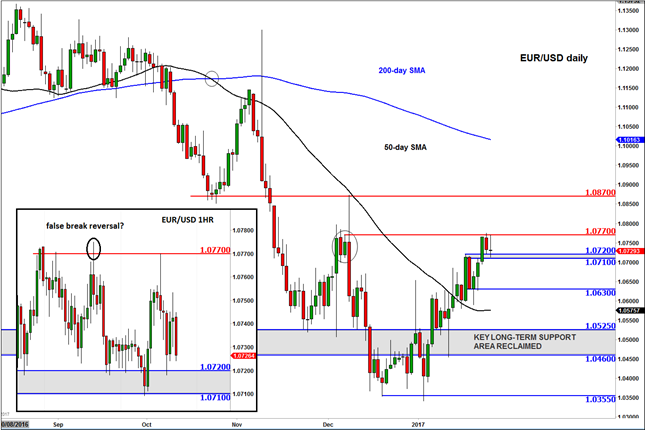