The theme driving the Euro this week has been one optimism.  After months of lockdowns and restrictions (including April), traders viewed the message from the EU earlier in the week that they expect to have most of their citizens vaccinated by the end of June as a positive for the Bloc. In addition, yesterday’s news that the European Medicines Agency (EMA) found that although there may be a link to rare cases of unusual blood clots, the total benefit-risk remains positive for the AstraZeneca shot.  However, the EMU left it up to individual countries to determine whether to use the vaccine.  See European vaccines will eventually get there and Euro high on vaccines for further analysis of Euro pairs.

After failing to break out of an inverse head and shoulders, EUR/USD reversed lower on February 25th forming a shooting star on the highs, near 1.2231.   Price moved lower in a flag formation, moving down to 1.1704.  As mentioned, the euphoric Euro moved high this week to the 38.2% Fibonacci retracement level from the February 25th highs to the March 31st lows near 1.1908 yesterday, forming another shooting star candlestick formation.  This reversal candle confluences with the 200 Day Moving Average and horizontal resistance between 1.1905 and 1.1920.  This area acts as key resistance for EUR/USD!  If the pair can hold this level, bears will be looking to offer the pair back down to the early November lows near 1.1603.

On a 240-minute timeframe, if bears are successful at pushing EUR/USD lower, it must first pass through horizontal support near 1.1790 and then a confluence of support at the March 31st lows and the downward sloping trendline from the February 25th highs, near 1.1704.  Notice that although the RSI pulled back from overbought conditions into neutral territory yesterday, it is currently hovering near the top of the price zone. If EUR/USD moves higher soon, the RSI should follow and move back into overbought conditions once again. 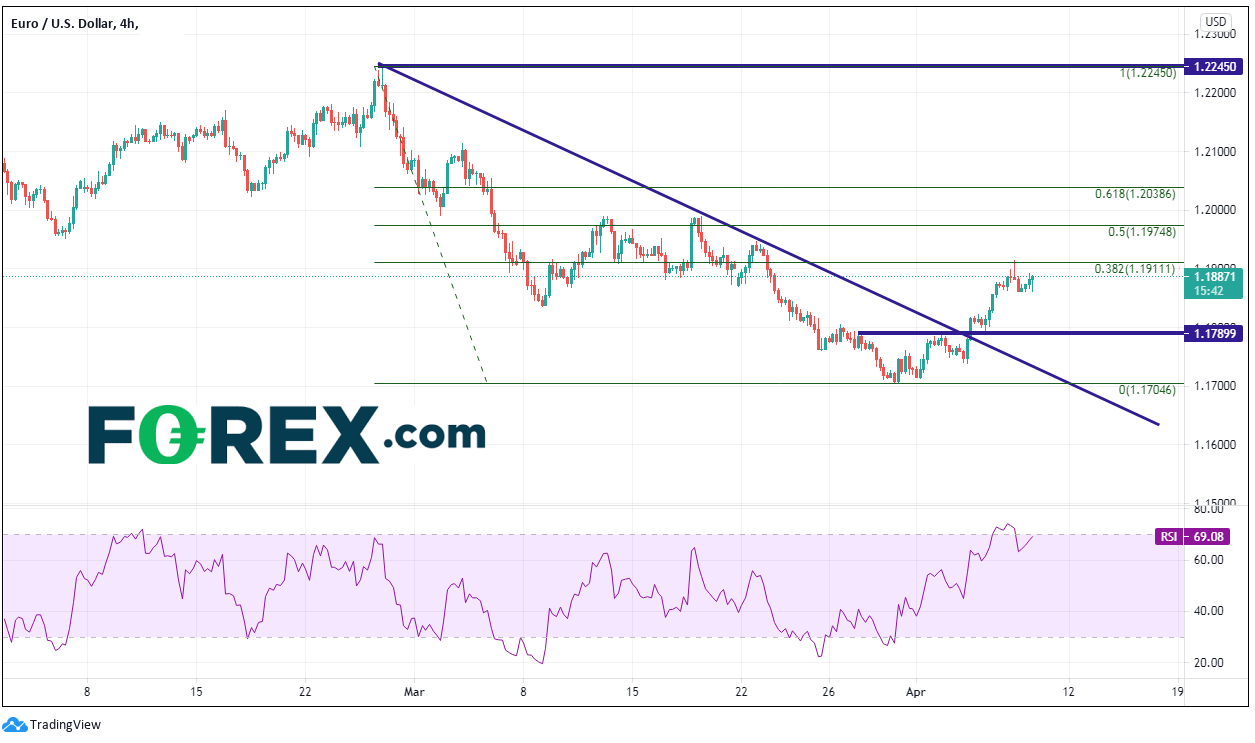 EUR/USD has been moving higher this week on optimism of a faster vaccine rollout.  However, traders need to consider when the “pricing in” the a vaccine has reached its peak.  This is true not only vs the US Dollar, but vs other currencies as well.