Since the European Central Bank’s last policy meeting, the euro has strengthened further, most notably against the dollar, while the stock markets have also risen.

Since the European Central Bank’s last policy meeting, the euro has strengthened further, most notably against the dollar, while the stock markets have also risen. However, the gains for stocks have been far less stellar here than, for example, in the US, even though economic data in the Euro area has remained positive. Investors are concerned that a stronger currency will hit exports and company earnings. This is also a concern for the ECB. As a result, there is a strong possibility that the ECB President Mario Draghi will deliver some sort of a verbal intervention at his press conference this afternoon. In an effort to make the euro cheaper, Mr Draghi may dismiss speculation that the ECB will end QE earlier than anticipated. However, if he comes across as being more hawkish then that could send the euro surging further higher, potentially causing the stock markets to go the opposite direction.

Dollar will remain in focus

The EUR/USD could get to 1.25 today in the event the ECB is hawkish. Otherwise we may see the rally falter around these levels, although the downside could be limited due to the ongoing bullish trend and widespread weakness for the US dollar. The latter will remain in focus after US Treasury Secretary Steven Mnuchin said of the weaker currency as being ‘good’ for US trade. But he balanced that out by pointing out that it may rise again in the long term given the stronger economy. His comments proved to be controversial, although he merely pointed out a fact. In any case, his comments are unlikely to have any long-lasting impact on the dollar. On Friday we will have the first estimate for US fourth quarter GDP to look forward to. This is likely to have a more meaningful impact, especially in the event of a large positive or negative surprise.

EUR/USD is overbought, but does it matter?

Ahead of the ECB, the EUR/USD is looking a little overbought after its big gains and as it hovers around the 1.2525-1.2450 resistance area. But according to the RSI indicator price has been ‘overbought’ for several weeks already, yet this hasn’t stopped it from going further higher. It is not uncommon for price to remain at overbought levels for long periods of time – look no further than the US stock markets, for example. Granted, the FX and equity markets are two different animals, but the point I am trying to make here is that just because something is overbought or oversold, this alone should not be the reason to take the opposite view. Instead, it should be used a warning sign that the move may be exhausted.

Levels to watch on this ECB day

As always price is the best indicator, and so unless there is a break in market structure, especially on the higher time frames, then the trend would remain bullish for the EUR/USD. The aforementioned 1.2525-1.2450 area was previously support back in mid-December 2014, with the lower end of this range also corresponding with the 161.8% Fibonacci extension level of the corrective downward move from the 2017 high. So, it should not come as major surprise to see the EUR/USD’s rally pause here, especially given the RSI overbought conditions and not to mention the upcoming ECB meeting. In the event price continues to push higher, 1.25 is the next logical bullish objective for the bulls. Support meanwhile could come in around the previous resistance area: 1.2300-1.2320. 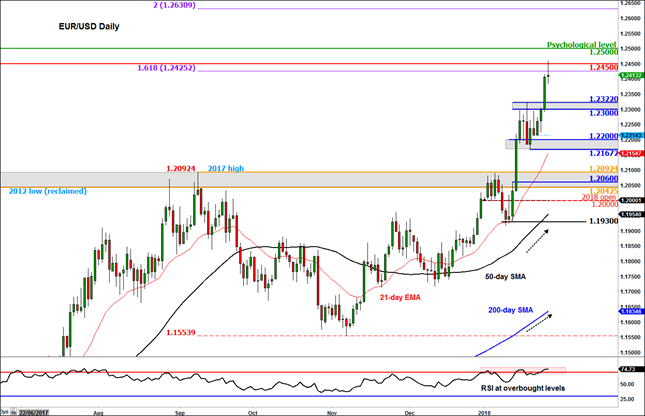