EUR/USD could break 1.10 resistance on US slowdown worries

The U-turn in the US dollar has been so severe that even the likes of the Brexit-hit pound and RBA-hit Aussie have managed to rise against it.

The U-turn in the US dollar has been so severe that even the likes of the Brexit-hit pound and RBA-hit Aussie have managed to rise against it. Thanks to a few noticeable data misses, the probability of a 0.25% rate cut has increased sharply. The market-implied odds of an October rate cut is up to 90% from just 40% a few days ago. Some have even talked up the prospects of a 0.5% rate cut, although this is unlikely in our view.  For one, it could inadvertently send the wrong signal to the market – that a recession is coming, and the Fed is panicking. For another, as my colleague Matt Simpson informed earlier, all the prior 50 bps cuts were from much higher peaks. Still, further small cuts cannot be ruled out if incoming data deteriorates further.

After the very weak ISM manufacturing PMI earlier in the week, today saw the services PMI come in at its slowest pace in 3 years, albeit it still managed to stay above the 50 boom/bust level. With the noticeable fall in the employment component of the ISM survey, investors won’t be too confident now ahead of Friday’s nonfarm payrolls report. If NFP disappoints, then XXX/USD should be able to rise further.

Among the dollar pairs we will be watching closely ahead of – and following – the NFP report is the EUR/USD. Despite its three-day rally, this pair has been trending lower for much of the year and currently sits well below last year’s low of 1.1215.  Yet, the yield spread between the German and US 10-year bond has been rising in the favour of the former. The spread has in fact been making higher highs and higher lows. This divergence suggests the EUR/USD ‘should’ be trading higher.

Thus, in the event the EUR/USD breaks through key resistance in the 1.1000 region, then we could see rates take out the prior high around 1.1110 in short order. However, if we go back below 1.10925/30 key support level again, then all bullish bets would be off again. 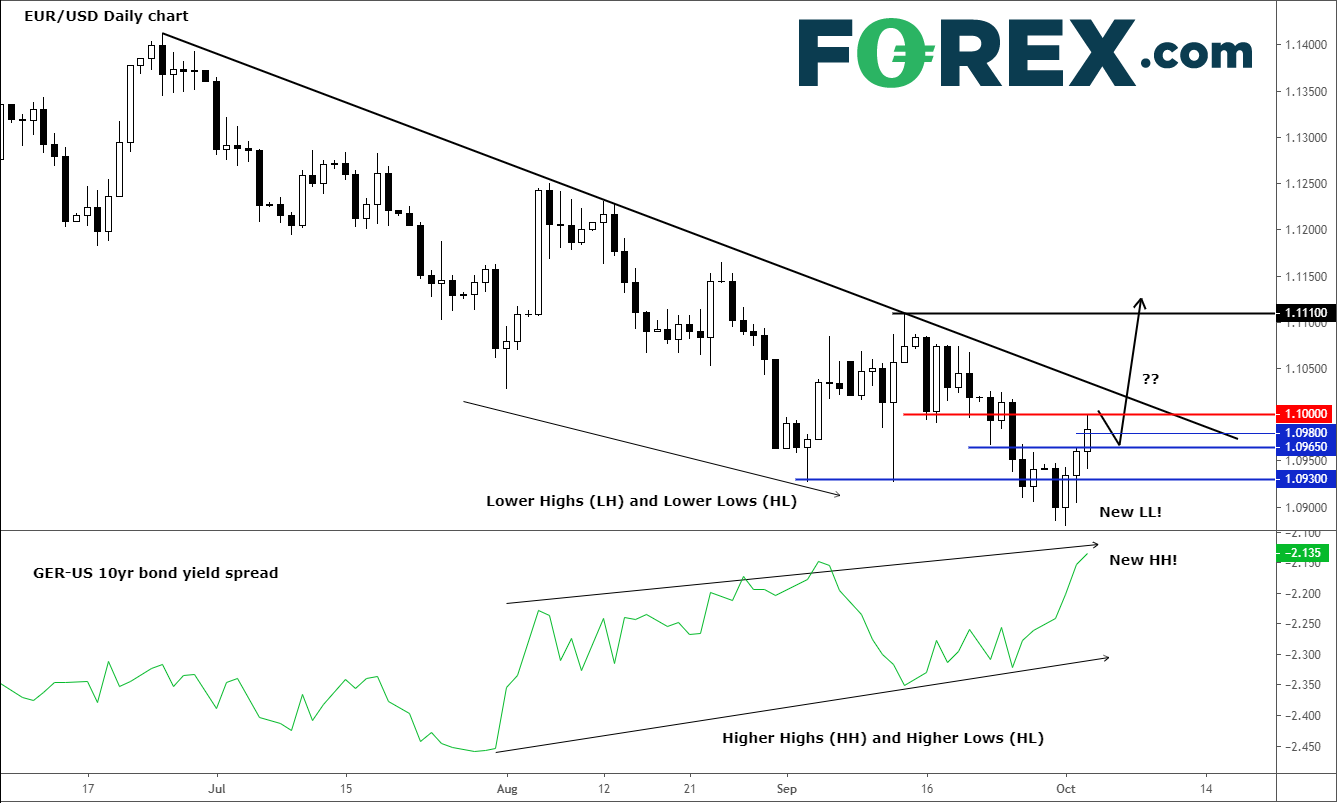