The euro has been the biggest faller among the major currencies today. The single currency was already down sharply before the release of the ECB minutes as market participants speculated that the European Central Bank may voice concerns about the currency’s recent strength. As it turned out, their fears were realised, and the EUR/USD fell to a new session and monthly low against the dollar.

The euro has been the biggest faller among the major currencies today. The single currency was already down sharply before the release of the ECB minutes as market participants speculated that the European Central Bank may voice concerns about the currency’s recent strength.  As it turned out, their fears were realised, and the EUR/USD fell to a new session and monthly low against the dollar.

According to the ECB’s July meeting minutes “concerns were expressed about the risk of the exchange rate overshooting in the future.” The central bank did however acknowledge that the appreciation of the euro could be “seen in part as reflecting changes in relative fundamentals in the euro area vis-à-vis the rest of the world.” Still, with the ECB becoming worried about a high exchange rate, one has to wonder whether they will now put their QE tapering plans on hold until central banks of the Eurozone’s largest trading partners start tightening their policies. Judging by the FOMC minutes yesterday, the Fed is in no hurry to raise interest rates again because of concerns about inflation being soft. However the Fed still plans to reduce the size of its balance sheet and given the fact that most of the bearish news in now priced in, any improvement in US data could see the dollar rebound more meaningfully as market participants revise their Fed rate hike expectations. The probability for a December rate increase currently stands below 50 per cent. In the UK, meanwhile, the Bank of England also sounded more dovish than hawkish at its recent policy meeting, which caused the pound to tumble. With both the GBP and USD already weak, now it could be the euro’s turn to potentially head lower and play catch up.

The fact that there was no follow-through once the high of yesterday’s bullish hammer candlestick pattern was broken earlier today, there was only one direction the EUR/USD was always going to go towards: the low of yesterday’s range, where buyers’ stop orders were residing. So, the EUR/USD has now taken out liquidity on both sides of yesterday’s range. What it does next during the New York hours will be important to observe. A potential break below today’s post ECB low could send this pair tumbling lower, while a break back above the 1.1710 pivotal level could lead to a short-covering rebound.

In terms of key levels, the next key support level to watch is at 1.1615, which was last year’s high. Once resistance, it could turn into support. Below this level, there is an untested broken resistance level at 1.1555 which is also worth watching. On the upside, 1.1710 is key now as a break back above here would weaken the short-term bearish outlook, as it would suggest that the sellers were trapped following the ECB news. The next area are of resistance is around 1.1800, which was the last low prior to the move up to a new 2017 high and into that long-term resistance level at 1.1875/80 (June 2010 low). If the trend is turning bearish, price should not go back above this level, because if it did, then it would be game over for the bears. 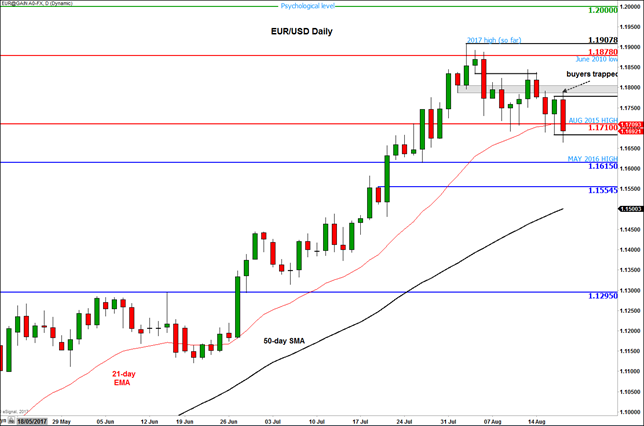