There wasn’t much in the way of economic data today and US stock markets are closed because of Presidents’ Day holiday. Stating the obvious here, but it has been a rather quiet and dull day in the markets. Things will hopefully pick up from Tuesday, although Wednesday is likely to be most important day of the week – certainly for the dollar – due to the release of the FOMC’s last meeting minutes.

There wasn’t much in the way of economic data today and US stock markets are closed because of Presidents’ Day holiday. Stating the obvious here, but it has been a rather quiet and dull day in the markets. Things will hopefully pick up from Tuesday, although Wednesday is likely to be most important day of the week – certainly for the dollar – due to the release of the FOMC’s last meeting minutes. Will the minutes convey any important information to cause the markets to move in a meaningful way? That remains to be seen. It could be a slow, lethargic week otherwise. I think the next big move in the FX markets will not happen until March 15, when the Fed’s next policy decision is due. Given the recent hawkish comments from Janet Yellen, we may see a surprise rate increase then.  But as far as the short-term is concerned, expect to see more chop and churn in the FX markets and continued strength in equities.

In terms of this week, Tuesday will see the release of the latest manufacturing and services PMI numbers from the Eurozone, which could see increased volatility in the EUR/USD and euro crosses. On Wednesday we will have some further important data from Europe, including German ifo and the second estimate of UK GDP, which will likely be revised slightly higher after the surprisingly strong performance from the manufacturing sector in December. From North America, we will have Canadian retail sales, but as mentioned the focus will primarily be on those FOMC meeting minutes. Not a lot will be happening on Thursday while on Friday the focus will be on the Canadian CPI as well as new US home sales data.

From a technical perspective, the EUR/USD looks poised to push higher in the short-term outlook. On Friday, it gave back almost the entire gains it had made from the day before. As a result, it formed an inside bar formation as the day’s trading range was contained inside that of Thursday’s. It is likely that there will be some significant stop orders either side of Thursday or Friday’s range. Given the bullish hammer candlestick formation from Wednesday at the top of the key long-term support range of between 1.0460 and 10525 (which was re-established in January after a brief break at the end of last year), the short-term bias looks to be moderately bullish. Thus what we may see going forward is for the EUR/USD to dip below Friday’s range, trap the sellers, before it potentially pushes higher again. An interesting level where price may find support around is at 1.0580 – the 61.8% Fibonacci retracement level against the most recent low.

Our long-term view on the EUR/USD will turn back decisively bearish only if and when price breaks below that 1.0460-1.0525 support range. Until and unless that happens, we are wary of a potentially sharp short-squeeze rally towards 1.0830/75 resistance rage and possibly even 1.1000. 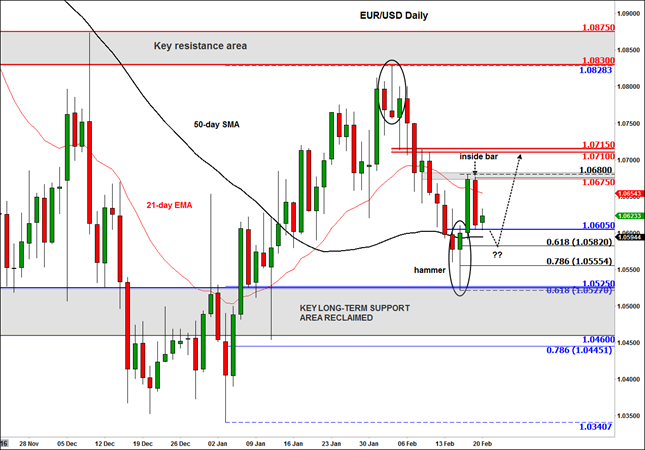