At today’s meeting, the Governing Council of the European Central Bank decided to leave the main interest rate unchanged at zero and made no alternations to the bank’s asset purchase programme. The policy statement contained nothing we haven’t heard before. As a result, the euro moved very little in reaction to the news and at the time of this writing it was trading its highest point on the day against the US dollar. The ECB’s President, Mario Draghi, will be speaking at the press conference starting at 13:30 GMT (14:30 CET).

At today’s meeting, the Governing Council of the European Central Bank decided to leave the main interest rate unchanged at zero and made no alternations to the bank’s asset purchase programme. The policy statement contained nothing we haven’t heard before. As a result, the euro moved very little in reaction to the news and at the time of this writing it was trading its highest point on the day against the US dollar. The ECB’s President, Mario Draghi, will be speaking at the press conference starting at 13:30 GMT (14:30 CET). He, too, is unlikely to add anything new given that the most recent policy change was only a month ago. The impact of extending the duration of QE to at least December 2017 will take time to filter through to the real economy, and that’s the point Mr Draghi will try to make at the press conference. But it will be interesting to see if he makes any eye-catching comments about the recent pick up in Eurozone CPI inflation, which rose to an above-forecast 1.1% in December. If he hints at the possibility of terminating QE at an earlier date in order to avoid overcooking inflation then the euro could extend its gains, at least until tomorrow. US President-elect Donald Trump’s inauguration is tomorrow. Trump’s speech will likely move the dollar and stocks sharply – as my colleague James Chen wrote in his preview HERE.

Thus, it could be an interesting time for the EUR/USD pair as we approach the weekend. When the ECB extended its QE programme and the Fed hiked interest rates in December, it looked almost certain that the EUR/USD was heading to parity. After all, this view was supported by both the fundamental backdrop of growing divergence of monetary policy stances between the US and Eurozone and also technical reasons: nearly two years of consolidation between 1.05 and 1.15 ended in a break down. The world’s heaviest-traded currency pair broke to a new multi-year low beneath 1.0500 to trade as low as 1.0340 at the start of this year. But it has since been creeping back higher. When a market fails to react in the way you would reasonably expect it to, then you would have to consider the alternative hypothesis: the lack of a more significant follow-through in the selling pressure makes me wonder whether we have seen a major low form in the EUR/USD.

Granted, the EUR/USD had been moving lower for a long period of time before the ECB and Fed’s policy meetings in December, so it was always due a pullback of some sort anyway. But it is where this bounce has taken place which makes me doubt if we will see parity any time soon. The lack of a more significant drop below the broken support area of 1.0460-1.0500 means a lot of bearish speculators have either abandoned their positions or are probably squeezed out. New sellers will only likely emerge again when we see a distinct reversal pattern form at higher levels. Until that is the case, it is the dip buyers who are probably going to be in control. So far this group of market participants are in the driving seat. But the initial test of the next key resistance at 1.0720 was rejected this week. This level will need to break if we are to see a run towards 1.08700 or even higher in the coming days.

The bears meanwhile would like to see a breakdown of short-term support at 1.0630. If that happens then a re-test of that key 1.0460-1.0525 support area – which had temporarily broken down – would then become likely. What happens next will depend on price action here: a potential break below would expose 1.0370 for a re-test and it would also sharply increase the odds of us seeing parity after all. But for now, this appears unlikely. 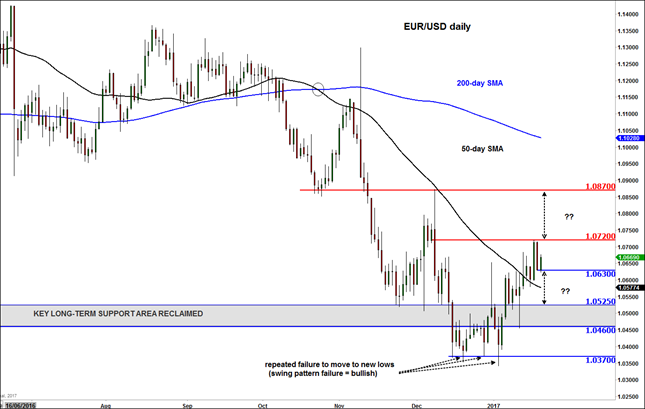