The EUR/USD earlier climbed to its best level since 2015. The world’s most heavily-traded currency pair briefly climbed above 1.17 before paring its gains amid profit-taking.

The EUR/USD earlier climbed to its best level since 2015. The world’s most heavily-traded currency pair briefly climbed above 1.17 before paring its gains amid profit-taking. The EUR/USD has been in a relentless rally since the turn of the year as the US dollar started to fall back and the euro climbed on improving Eurozone fundamentals. Large fiscal stimulus programmes and tax cuts that were promised by Donald Trump never really came to realisation for one reason or another, causing investors to price out the prospects of strong growth in the US. The Fed’s planned rate rises were mostly priced in by early this year, so when the central bank actually tightened its policy, the dollar hardly responded in the way one would have expected. The greenback wasn’t helped by weakness in US data. In the Eurozone meanwhile speculation rose that the ECB would soon taper its QE stimulus package as inflation and other macro pointers improved.

However, the ECB has so far resisted the pressure and some would argue that the euro may be getting ahead of itself. Indeed, the IMF has warned the ECB against tapering QE prematurely. The fund has urged the ECB to keep its extraordinary stimulus in place until there is more evidence that inflationary pressures are rising. The EUR/USD’s next short-term move may depend to some degree on the outcome of the latest FOMC policy decision on Wednesday. Rates are widely expected to be held unchanged, so the focus will be on the wording of the policy statement. We think this Fed meeting will turn out to be a bit of a damp squib and the US GDP on Friday may provide a more significant direction for the dollar.

With the dollar severely oversold and euro overbought, a potential correction in the EUR/USD would not come as surprise to us now. However rather than calling the top, we will wait for price to tell us when that may be. But the EUR/USD has now reached the top of its 2.5-year range at around 1.1700. Unsurprisingly, the weekly RSI has climbed to ‘overbought’ levels (i.e. above 70) after the recent upsurge. The RSI will need to unwind from these levels eventually. This will be achieved either through price action (bearish) or time (bullish). Thus a period of consolidation may actually be positive for the EUR/USD. That being said, the RSI can get to significantly higher levels before the EUR/USD rally falters. With the trend clearly bullish, we will continue to look for bullish setups on the lower time frames until we see a clear reversal pattern unfold on this pair. An example of a reversal pattern could be a false break above 1.1710, combined with a bearish-looking daily or ideally weekly candle, and the confirmation would be a break in market structure (i.e. when the last higher low gives way). 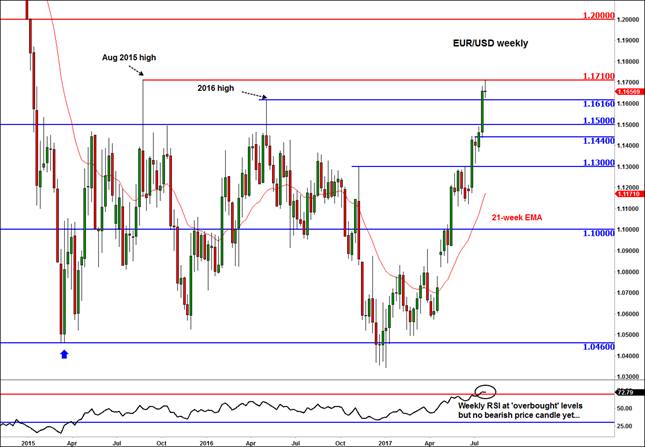