The drop in inflation underscores the European Central Bank’s (ECB) reservation about tightening monetary conditions too quickly in the Eurozone. This is potentially bad news for the euro, and good news for stocks as it increases the likelihood that the ECB will not drop its dovish policy stance sooner than expected.

The EUR/USD was little-changed at the time of this writing, but after last week’s big drop question marks remain as to which direction the euro is headed over the coming weeks. On the one hand, economic activity in the Eurozone is continuing to improve, as indicated for example by the above-forecast third quarter GDP reading (0.6% q/q) and the fall in the unemployment rate (to 8.9% from 9.0%) as reported by Eurostat this morning. On the other hand, however, inflation unexpectedly eased back in October with the headline Consumer Price Index (CPI) moderating to 1.4% year-over-year from 1.5% and core CPI slipping to 0.9% from 1.1% in September. The drop in inflation underscores the European Central Bank’s (ECB) reservation about tightening monetary conditions too quickly in the Eurozone. This is potentially bad news for the euro, and good news for stocks as it increases the likelihood that the ECB will not drop its dovish policy stance sooner than expected.

On the other side of the equation for the EUR/USD, you have the US dollar. After its recent strength and last week’s acceleration, the dollar started the new week on the back foot yesterday. But it has bounced back today and was higher against a number of currencies except the pound, which is holding its own rather well ahead of the Bank of England’s likely interest rate increase on Thursday. The Federal Reserve, meanwhile, is highly unlikely to increase interest rates on Wednesday, but with the US central bank already announcing plans to normalise its huge balance sheet, this should, in theory, support the dollar in the long-term outlook. Consequently, the EUR/USD may continue to head lower over the coming months, barring an unexpected downturn in the US economy. In terms of this week, the key risk to our bullish dollar forecast is the nonfarm payrolls report. If this comes in significantly weaker than expected then the dollar could drop sharply. But after last month’s weather-related drop, non-farm employment is expected to have soared back (+300K) in October.

From a technical point of view, the EUR/USD currently resides inside a short-term bearish channel, which could turn into a longer-term bull flag in the event price breaks out of it to the upside. As things stand, though, the path of least resistance appears to be to the downside after price failed to hold its own above the previous long-term range high at 1.1700/10 area. With this being the last day of the month, a close below 1.1700/10 area would create a monthly false breakout reversal pattern. This would be significant as the EUR/USD has already respected long-term resistance at around the 1.2040/50 area in each of the past two months. On the daily time frame, we can also see that the EUR/USD is also respecting last year’s high of around 1.1615, after finding decent support from the 1.1555-80 old resistance zone. So, one also has to consider the bullish scenario in the event price rallies from here. The way I see it, if price were to climb back above the broken support area around 1.1660/70, then last week’s breakdown could turn out to be a bear trap as those who played the Head and Shoulders neckline breakdown are shaken out of their positions. The line in the sand for me is at 1.1755, as this was the last level of support pre breakdown – price shouldn’t get above here if the trend is still bearish. The trend would objectively turn bullish upon a break above 1.1835 – the swing high made on the ECB day last week. 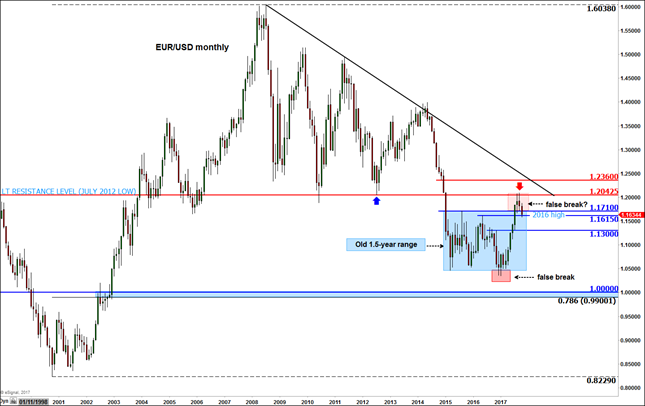 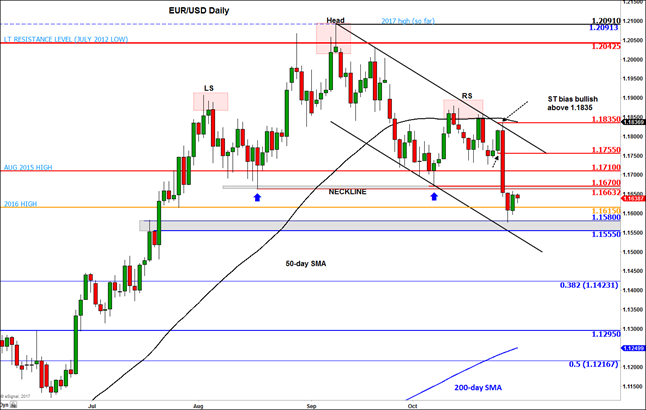