EUR/USD poised for breakdown as US rate hike looms

The EUR/USD could be on the verge of a sharp move in the coming weeks after experiencing one of its quietest quarters ever between the months of July and September.

The EUR/USD could be on the verge of a sharp move in the coming weeks after experiencing one of its quietest quarters ever between the months of July and September. Ranges tend to enlarge after quiet periods and shrink after volatile phases. Usually this happens because market participants are waiting for some sort of stimulus, which, in the case of the EUR/USD, could be the US presidential elections and the Federal Reserve meeting in December. The markets typically make their moves weeks in advance of the fundamental events and then accelerate when the outcome of the news becomes clearer as the latecomers join the party. So, fasten your seatbelts, because we are potentially heading into a volatile period for the EUR/USD and indeed many financial markets.

As far as the dollar is concerned, I think it will mostly likely continue to push higher and outperform the euro as the time for a Federal Reserve rate increase nears. Meanwhile like every other major central bank except the Fed, the ECB will probably maintain its dovish stance for some time yet. This should apply downward pressure on the EUR/USD as the difference between the US and Eurozone bond yields widen.

Soon the US election uncertainty will be out of the way and judging by the outcome of the TV debates between the two candidates so far and the opinion polls, Hillary Clinton appears poised to be the next US president. Of course, a lot could still change but if Clinton wins, it is assumed that it will be business as usual for the Federal Reserve, which remains on track to resume its hiking cycle in December after a year-long pause.

Now the jobs report did fail to meet expectations on Friday, but it wasn’t a massive disappointment and thus unlikely to make a big difference when it comes down to a decision about lifting rates. Indeed, Fed’s Vice Chair, Stanley Fischer, said the US is now "close to full employment,” indicating that the central bank remains on track for a December lift off.  He added that “with solid gains in employment and household income and upbeat consumer sentiment" consumption spending should continue to support growth “over the second half of the year." Comments from a couple of other Fed members have also been hawkish recently.

From a technical point of view, the EUR/USD has made little progress. But that could be about to change because price is approaching the tipping point of the converging trend lines. It will break in one or the other direction soon, which is the good news. The bad news is that it is not too clear at this stage which direction the breakout will be, or how far it will go in the direction of the break. After all, the moving averages are pointing higher, but the long-term trend is still bearish when you look at the weekly or monthly charts. So there are conflicting technical signals to consider.

I think the break will probably be to the downside given the abovementioned fundamental stimuli. What’s more, the behaviour of recent price action has been more bearish than bullish: since peaking around the 1.1320-50 resistance area towards the end of August, the fibre has been making lower highs and on Friday it made its first lower low, albeit it closed well off its lows thanks to a weaker US jobs report.

Nevertheless, the potential is there for a sizeable drop if the 1.1105-25 support area gives way in the coming days. Below this support zone, the next potential support or bearish target could be at 1.1025 which was the high of the last bearish candle before the onset of the rally at the end of July. But if it gets to this level, the EUR/USD could fall a lot further over time.

Meanwhile, the Dollar Index, which is a measure of the US dollar relative to a basket of foreign currencies on a weighted geometric mean basis (EUR 57.6% weight), broke out of its own converging trend lines pattern to the upside last week. Admittedly, the weak US jobs report derailed the rally on Friday but the index nevertheless held its own above the 96.25-45 support range. With the Dollar Index being almost literally the inverse of the EUR/USD, this suggests that the latter could break down this week as long as the former does not break back below the abovementioned support range. 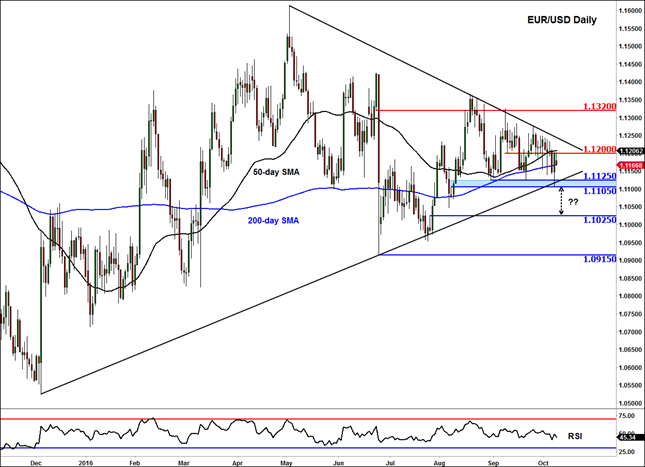 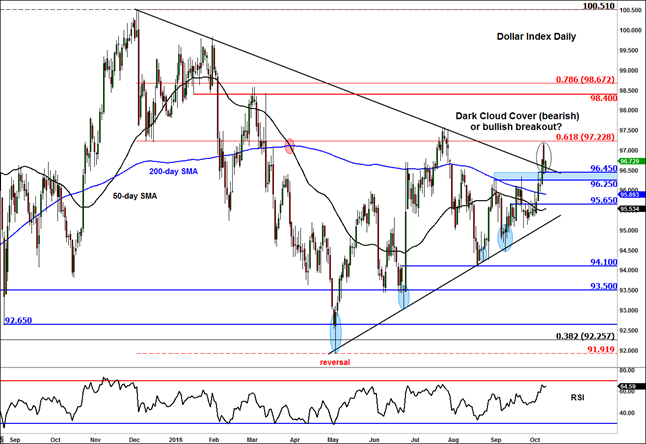