EUR/USD returns to pre-Draghi levels ahead of US GDP

The single currency initially fell to a fresh 2019 low against the dollar in reaction to what looked like a dovish ECB Policy statement, before staging a sharp rally off the lows in response to President Mario Draghi’s comments at the press conference, where the ECB President appeared a lot less dovish than had been anticipated.

The EUR/USD came back to where it started before the European Central Bank’s policy announcement was made on Thursday. The single currency initially fell to a fresh 2019 low against the dollar in reaction to what looked like a dovish ECB Policy statement, before staging a sharp rally off the lows in response to President Mario Draghi’s comments at the press conference, where the ECB President appeared a lot less dovish than had been anticipated. He said that there were no discussions of cutting interest rates on Thursday, while any rate cut would come with mitigating measures. What’s more, there was a lack of unanimity in discussions, according to Draghi. But overall, the central bank did appear to prepare the markets for easing in September. So, fundamentally, the outlook remains bearish for the euro.

The EUR/USD will remain in focus later on with the release of US second quarter GDP. The world’s largest economy is forecast to grow at its slowest pace since 2016, ahead of an expected rate cut from the Federal Reserve next week. GDP is expected to print a meagre +1.8% q/q annualised (that is, quarterly change x4) versus +3.1% in Q1. This should move the markets, especially if the actual number shows a large deviation from the expected reading. So, hold off your weekend plans until after it is published.

Looking ahead to next week, there will be plenty of news that could impact the EUR/USD exchange rate. Among other things, we will have CPI and retail sales from the Eurozone, while US data includes the always-important non-farm payrolls report. For a more in-depth outlook, watch out for our week ahead report due later this afternoon.

Meanwhile from a purely technical point of view, the EUR/USD still looks heavy with price unable to break through the 1.1180-1.1210 resistance area yesterday. So a breakdown below 1.1100 towards the 127.2% Fibonacci extension at 1.1025 looks the more likely outcome at this stage than a short-covering rally towards the 200-day average at 1.1300. That is unless US GDP comes in well below expectations today or the Fed cuts by 50 basis points next week. 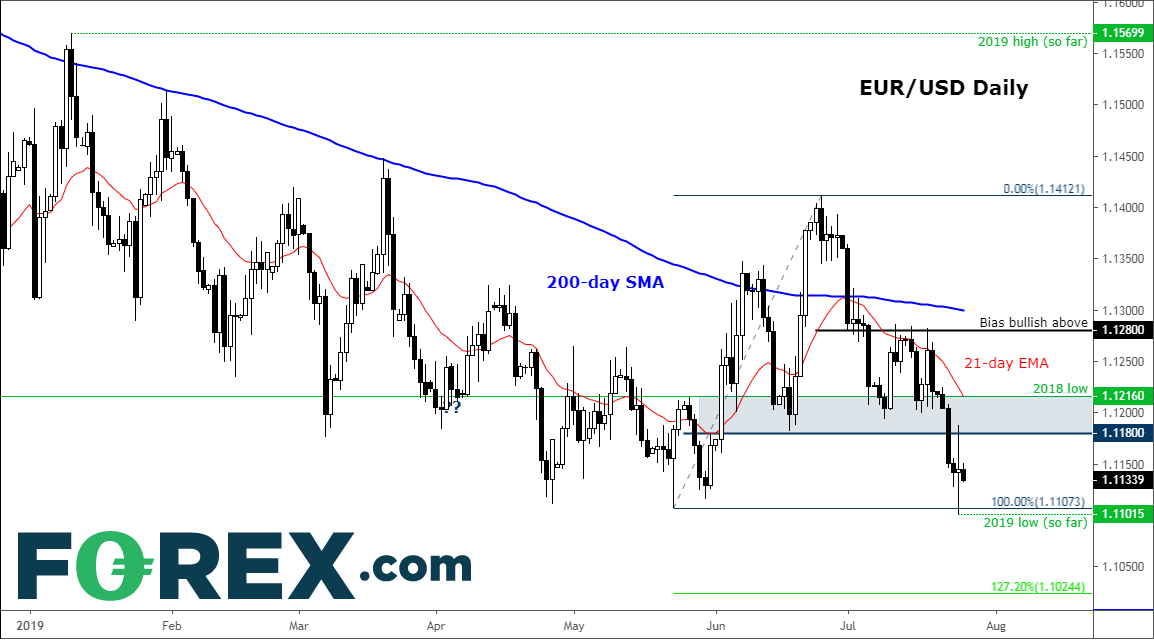