EUR/USD steady ahead of NFP

Now today’s focus is on the US jobs report which should cause noticeable volatility in the markets, especially if the numbers deviate from expectations by a sizeable margin. It would take a really bad report – and I am talking about net job losses – to deter the Fed from hiking rates at its meeting later this month.

Now today’s focus is on the US jobs report which should cause noticeable volatility in the markets, especially if the numbers deviate from expectations by a sizeable margin. It would take a really bad report – and I am talking about net job losses – to deter the Fed from hiking rates at its meeting later this month. Anything other than that may not cause the dollar to weaken significantly, although there is a possibility that it will close the day lower anyway because a rate hike is basically priced it. I think the market is waiting to see what the Fed is thinking about in terms of the future path of interest rates. How many, if any, rate rises will there be in the first half of 2017, for example.

Apart from the dollar and the Fed, the focus next week will be on three other central banks: RBA, BOC and ECB. Speculation that the ECB is thinking about tapering QE early and/or not extending it beyond its intended March 2017 end date has supported the euro and undermined European equities recently. Mario Draghi, the ECB president, may shed some light into this at his press conference on Thursday. So until then, the EUR/USD may be able to hold its own above that critical 1.05 support, regardless of how strong or otherwise the NFP will be today. That is our base case scenario now. If so, the fibre could break above last week’s high of 1.0660 decisively before rallying towards 1.0850/80, the last swing low prior to the breakdown.

The alternative scenario is that the EUR/USD will break decisively below the critical 1.0460-1.0525 area at the second time of asking. If this were to happen then the EUR/USD could start its next leg lower towards 1.02, and eventually parity. Will it happen today? Who knows, but we would probably need to see a very strong set of numbers in the jobs report. But the most likely trigger for a potential breakdown will probably be the ECB next week or the Fed the week after. 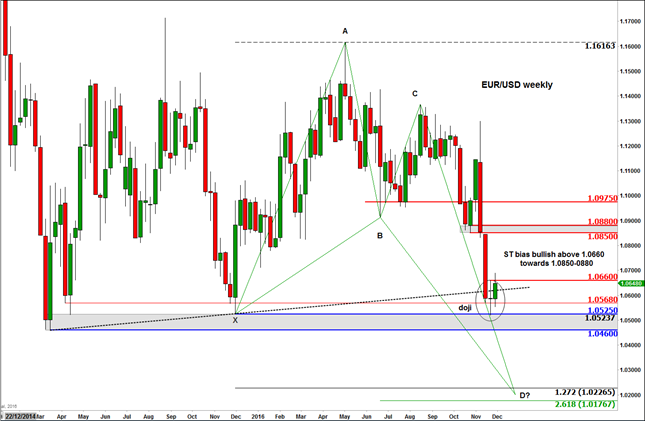