The world’s heaviest-traded pair has risen for two reasons so far this month.

First, the US dollar has weakened across the board. The Fed raised interest rates last week but stopped short of hinting at a more aggressive tightening cycle. By then a rate rise was fully priced in anyway. Thus the announcement was met with a typical “buy the rumour, sell the news” type of a reaction. Given the extent of the falls, the dollar well region its poise soon, but next week may be too early for it to do so. After all, the economic calendar looks very quiet and therefore there likely won’t be a fundamental trigger to send it decisively higher.

The second reason why the EUR/USD has risen lately is because of a stronger euro. The single currency has appreciated against not just the US dollar, but also against the commodity currencies, though it hasn’t moved much versus the pound or the yen, as the latter has been underpinned along with other perceived safe haven assets like gold and to a lesser degree silver. The stronger performance of the euro in recent times has been directly in response to market participants expecting tighter monetary conditions in the Eurozone, owing to an improving economy. So far, the ECB has talked down talks of tapering QE early. But with inflation rising and other macro pointers improving, the market has other ideas. Indeed, the sharp improvement in the latest PMIs for both the services and manufacturing sectors as we have seen today underscores this view.

That being said, political risks remain high in the Eurozone with the upcoming French elections. So far however this hasn't had a major impact on investor confidence. That could easily change of course, but if it will likely hit the European stock markets more rather than the single currency, as it did during the height of the Greek debt crisis. But the Brexit shock had the opposite impact as the pound got pounded and UK stocks surged to record highs. Thus, for that reason, the potential impact of political risks on the single currency is difficult to predict.

Still, fundamentally, the EUR/USD may be able to gain further in the short-term as investors reprice interest rate differential between the two regions. In the long-term however, the outlook is not so clear. It will depend to a great degree on the outcome of incoming economic data, something which cannot be predicted with a high degree of confidence, and politics in both regions.

But that false breakout below the 1.05 handle at the end of last year and start of this means the path of least resistance on the EUR/USD is technically to the upside. Consequently I am expecting to see a bullish breakout outside of the current range. Undoubtedly, there will be significant stop orders building above and below the current 1.05-1.08 range.  With the EUR/USD’s retest of the 1.05 handle holding firm at the start of the month, that suggests to me that the buyers may have more of control at this stage. But whether or not the potential breakout will hold remains to be seen. In any case, I still think that a breakout could target the area around 1.10 next. This psychological level ties in with the 50% retracement against the last significant high at around 1.16. In addition, point D of an AB=CD move also comes into play around there. I would drop my bullish bias if I see a distinct reversal pattern around these levels, or if 1.0460 support finally gives way – whichever comes first. 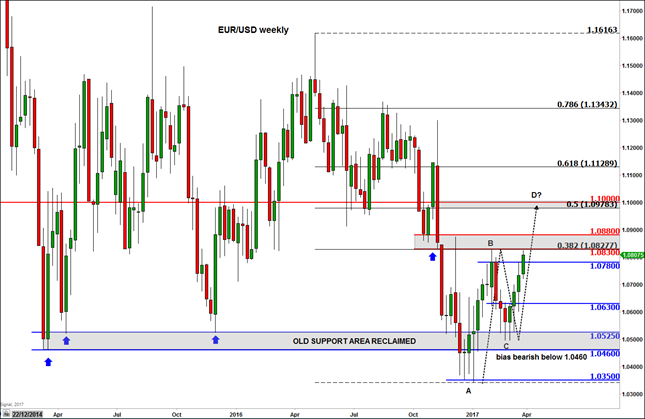