EUR/USD tests key long term levels ahead of US CPI

After an eventful last week, the start of this one has been very quiet so far. Monday saw minimal volatility across the majors as the dollar extended its NFP-related rebound against the commodity currencies but declined slightly versus the euro.

After an eventful last week, the start of this one has been very quiet so far. Monday saw minimal volatility across the majors as the dollar extended its NFP-related rebound against the commodity currencies but declined slightly versus the euro. The single currency rose despite data showing German industrial production unexpectedly fell 1.1% in June. Admittedly, the data was a bit out of date, but nonetheless the lack of a negative reaction from the euro means the currency is continuing to show strength. The euro was a touch higher at the start of today's session against a number of currencies. Thanks to the recent improvement in data and reduced political risks in the Eurozone, the market has been speculating that the European Central Bank will be next major central bank to swap its neutral stance to a tightening one. But so far the ECB has downplayed these rumours and has tried its best not to come across as hawkish. Nevertheless, the market has basically chosen to ignore Mario Draghi and his dovish ECB colleagues. It is likely that the euro would remain largely in demand until the central bank's September meeting, where it may set out a plan on how it will taper its massive QE stimulus programme.

Given the dollar's mild rebound, the EUR/USD may consolidate around its current levels if the euro also remains bid. The greenback is unlikely to move significantly until Friday's US CPI data is released. Thus, if we are to see further euro strength, our best bet would be to look at a euro cross instead.  However, the dollar may struggle to escape the current negative sentiment despite last week’s bounce. Thus, even the EUR/USD may be able to extend its gains.

Having already cleared the prior swing highs at 1.1615 (2016 high) and 1.1710/15 (August 2015 peak), the EUR/USD has respected the first of the three prior reference points: 1.1875/80, which was the 2010 low. The other reference points are at 1.2040/5, the 2012 low, followed by 1.2165, which was the last support level prior to the breakdown below the 1.20 handle back in 2014. These levels and the 1.20 psychological hurdle remain our long-term bullish objectives. If the EUR/USD forms bearish price action around any of these levels then we could see a correction of some sort in the weeks to come, given how ‘overbought’ the RSI is at the moment. But until and unless we see clear bearish price action, we remain bullish for the time being. 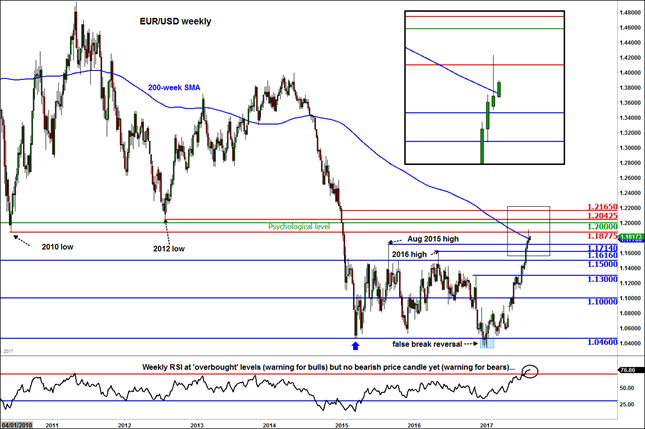