EUR/USD weakens ahead of ECB

The European Central Bank is widely expected to announce a plan to reduce the pace of its monthly asset purchases on Thursday. But at the same time, the ECB may also extend the duration of the QE programme so that it doesn’t spook the market and choke off economic growth.

The European Central Bank is widely expected to announce a plan to reduce the pace of its monthly asset purchases on Thursday. But at the same time, the ECB may also extend the duration of the QE programme so that it doesn’t spook the market and choke off economic growth. If this is the case, the central bank’s decision may therefore come across as neutral or dovish rather than hawkish. If so, this could weigh heavily on the euro in the short-term outlook.

So, the EUR/USD may be on the verge of a correction, particularly if the Fed-driven dollar simultaneously remains supported. Ahead of the ECB meeting on Thursday and tomorrow’s release of Eurozone Flash Services and Manufacturing PMIs, the EUR/USD has actually started the new week how it ended the last one: lower. The euro’s weakness may well be telling us that the market is positioning itself for a dovish ECB.

From a technical point of view, the EUR/USD remains in a range. Last week’s inside bar technical formation means there will be a pool of liquidity resting on either side of the 1.1730-1.1860 range.

With the ECB decision scheduled for Thursday, one potential scenario could be that price breaks below last week’s low at 1.1730 and probe liquidity below this level, before going back into the range and then take out resting liquidity above last week’s range at 1.1860.

But if there’s acceptance below last week’s low (should we get there) then the alternative scenario could be a week-long sell-off until price reaches the next levels of support at 1.1615, 1.1500 or even 1.1300.

Meanwhile any sustainable move above 1.1860 would put the bearish view to bed and potentially pave the way for a re-test of the psychological 1.20 handle or even the year 2012 low at 1.2040s, which was already tested a few times late in the summer. 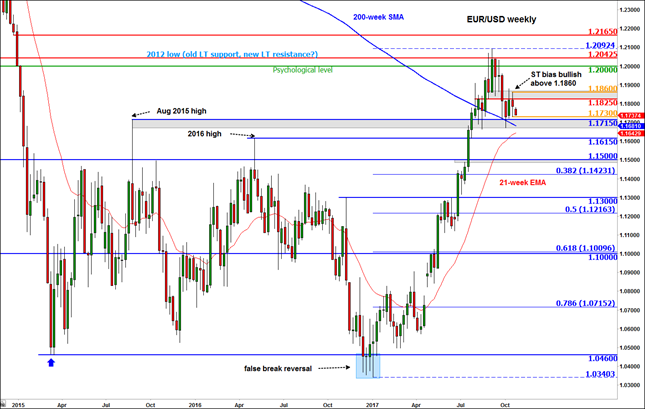