EUR/USD: What Now For The Fallen King Dollar?

Now that the FOMC is out of the way, the market's attention will turn to US GDP on Friday. With the dollar adjusting to expectations of slower future US rate rises, if we now see some improvement in US data then the dollar could start to head higher again, especially against her weaker rivals such as the Japanese yen or Swiss franc.

Prior to the release of the July FOMC statement yesterday, the dollar had found some support and gold had weakened slightly. Market participants were wary of the possibility of a hawkish surprise, so they had taken profit on their short dollar positions. But once speculators realised that wasn't the case, they evidently re-established those positions and the dollar responded by dropping across the board. The EUR/USD took off and cleared the resting liquidity above the August 2015 high at 1.1710, before stalling around 1.1775, while the GBP/USD finally moved away from the 1.3000 hurdle to climb to a high so far of 1.3155. Meanwhile buck-denominated gold rallied even though US equity indices remained near their record high levels.

But now that the FOMC is out of the way, the market's attention will turn to US GDP on Friday. With the dollar adjusting to expectations of slower future US rate rises, if we now see some improvement in US data then the dollar could start to head higher again, especially against her weaker rivals such as the Japanese yen or Swiss franc. In fact, the USD/CHF has already bounced back and was hitting fresh weekly highs at the time of this writing. So, going forward, I don’t think it will be a one-way direction for the greenback. While it could very easy fall further, it will do so mainly against currencies where the central banks is, or about to, turn hawkish. The European Central Bank is likely to announce in September what its plans are regarding QE. So if the euro were to rise further, we will need to see further improvement in Eurozone data.

In the short-term, the repeated breakout to new 52-week highs means momentum is behind the EUR/USD and this may keep the popular pair bid until the ECB’s September meeting, unless somethings changes dramatically in the interim. With that in mind, the EUR/USD could be heading a lot higher if it manages to hang above the now broken 1.1710 level, which was the prior range and August 2015 high. Failure to hold above here however would suggest the breakout buyers are the trapped traders, in which case the market may then squeeze them out of their positions in the days or weeks to come. Remember how the sellers were trapped when the EUR/USD broke below the 1.0460 as it was ‘supposed’ head to parity at the start of the year, only to turn around violently in the weeks and months that followed? Yeah, I am not suggesting it will now drop as strongly as it rallied if this 1.1710 level gives way, but nevertheless it could cause some technical damage in what this is a strong bullish trend. The EUR/USD’s short-term outlook would turn decidedly bearish on a potential close below 1.1615 – not only was this the low from yesterday but also the high of May 2016. Thus a move back below 1.1615 would mean yesterday’s move was a false break.

But assuming the 1.1710 level holds and price doesn’t break 1.1615 then the path of least resistance for the EUR/USD would remain to the upside. For now, this is our base case. Some of the next bullish objectives to watch would include 1.1880 – the June 2010 low, followed by the psychological 1.2000 handle and then 1.2045 – the July 2012 low. I am not suggesting price will get to any of these levels, merely highlighting some potential targets. One has to proceed with a degree of caution given the extent of the rally. 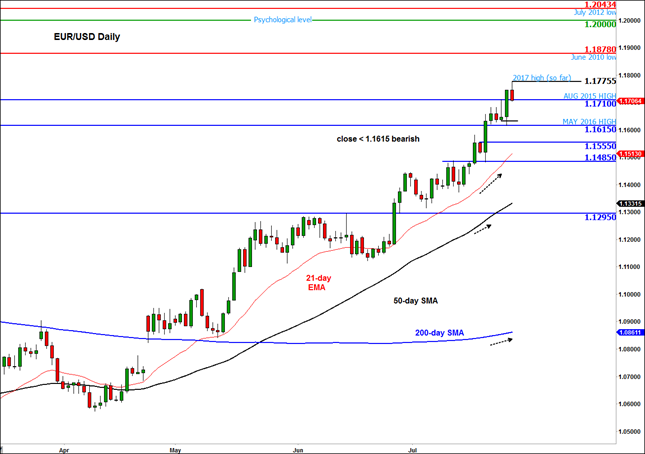