Focus turns to US dollar ahead of jobs data, Fed meeting

On Wednesday, the US dollar continued to surge within its recent rebound that extends back to early last week, as anticipation of US tax reform continued to mount and markets looked forward to key US events on the near horizon.

On Wednesday, the US dollar continued to surge within its recent rebound that extends back to early last week, as anticipation of US tax reform continued to mount and markets looked forward to key US events on the near horizon. Aside from the major fiscal policy issue of tax reform that has been preoccupying US markets, which is being measured by the progress of tax bills making their way through Congress, monetary policy continues to be critical for the US dollar. This monetary policy will take center stage next week when the Federal Reserve makes its next interest rate decision at the highly-anticipated December FOMC meeting. But before that decision, the often market-moving US jobs report will be released on Friday, potentially providing some input into future Fed policy decisions.

As it currently stands, markets are fully expecting the Fed to raise interest rates next Wednesday by 25 basis points for a third time this year. These expectations, as measured by Fed Funds futures markets, have remained at or close to 100% for many weeks now. At such a high expected probability, most of the anticipation is likely to have already been priced-in to the dollar. Now, markets are looking primarily for any clues as to the future path of monetary policy that may be gleaned from the Fed’s statement, press conference, and economic projections (which include the “dot-plot” forecasts of future interest rate changes by Fed officials). Of course, in the unlikely event that the Fed defies expectations by failing to raise rates next week, the dollar is likely to take a rapid and sustained plunge. Assuming, however, that there is indeed the expected rate hike, the Fed’s policy wording and outlook next Wednesday will be of critical importance.

Before the FOMC meeting, however, a more immediate concern will be Friday's November jobs report, centering on the headline non-farm payrolls number (around +200,000 jobs expected), unemployment rate (4.1% expected), and average hourly earnings (+0.3% expected). Wednesday’s ADP private employment report, sometimes seen as a precursor to the official non-farm payrolls data, came in at 190,000 private jobs added in November, which was approximately in-line with expectations. While Friday’s jobs outcome is unlikely to make very much of an impact, if any, on next week’s Fed decision, the ongoing employment landscape is critical to the Fed’s policy path going forward.

Ahead of these key events, and amid continuing speculation over the progress of US tax reform, the US dollar index has remained mostly bullish since bouncing from the 92.50 support level early last week. The index has currently reached up to approach its 50-day moving average as well as the key 94.00-area resistance. The outcome of Friday’s US jobs report, next week’s Fed outlook, and the progress of US tax reform, will be the primary drivers for the dollar in the next few weeks running up to the end of the year. Key potential breakout levels on the US dollar index, depending on these outcomes, are clear – the noted 94.00 resistance to the upside, and the noted 92.50 support to the downside. Any bullish breakout above 94.00 is likely to target the next major upside resistance level around the 95.15 highs of both October and November. 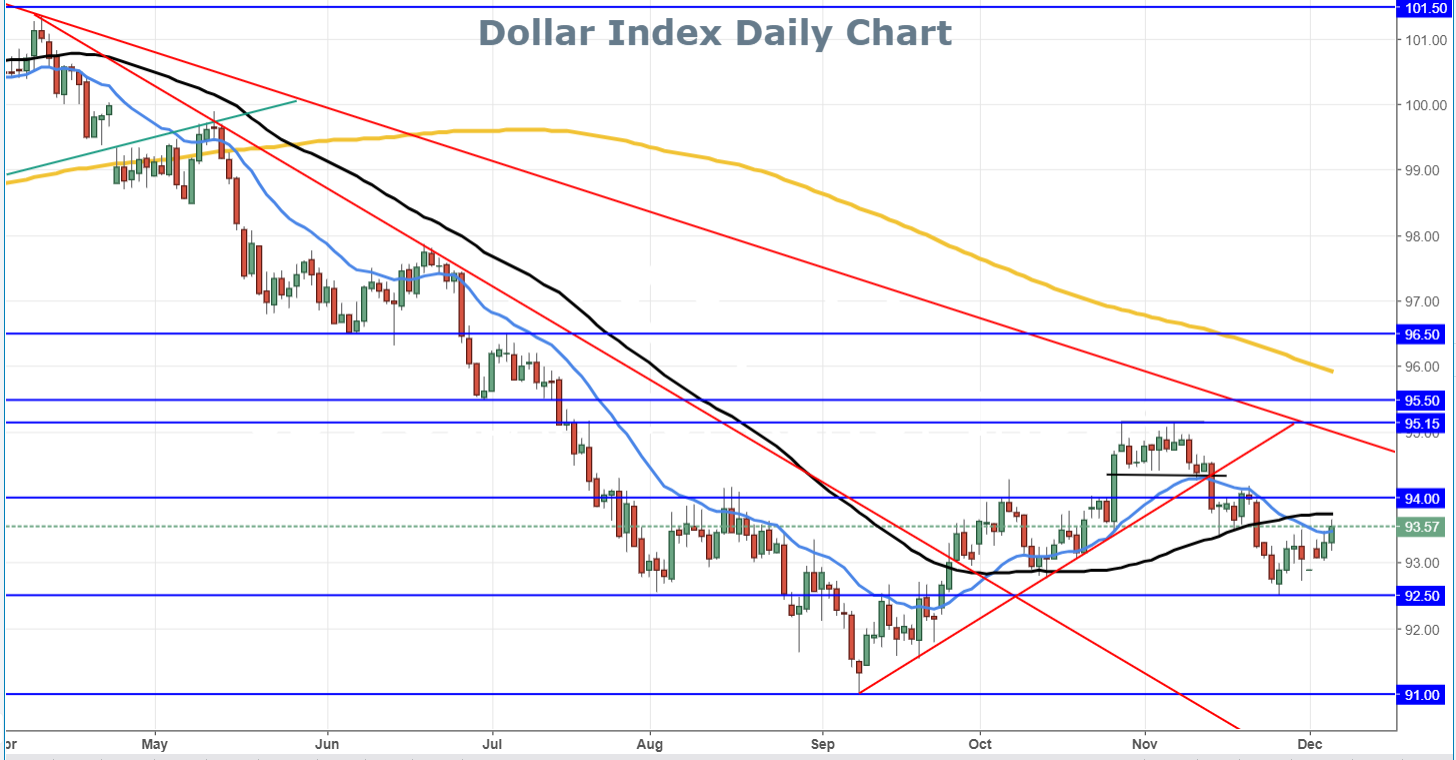