FOMC meeting: Rate hike a “done deal” but what about inflation?

Ever since former Fed Chair Ben Bernanke’s introduced “communication policy” as a tool for influencing markets, the central bank has sought to telegraph its changes in monetary policy well in advance. Assuming the central bank sticks to the script this time around, another 0.25% interest rate hike is a virtual certainty. Indeed, the market-implied odds of such a move are above 96% according to the CME’s FedWatch tool, so an interest rate hike is already “priced in” to current market prices.

That said, the wording of the accompanying statement, the quarterly Summary of Economic Projections (including the infamous “dot plot” of FOMC members’ interest rate expectations), and Fed Chair Powell’s accompanying press conference could all exert a substantial impact on markets. Specifically, traders will be looking for signs that the central bank is growing increasingly wary of rising price pressures, especially in the wake of this morning’s Consumer Price Index (CPI) report, which showed prices rising 2.8% year-over-year, the highest rate in 75 months. If Powell and Company pay more heed to signs of inflation heating up, investors will likely view the meeting as hawkish and increase bets on two more rate hikes this year (September and December).

An under-the-radar event risk from tomorrow’s meeting is the chance that Chairman Powell announces that the Fed will be holding a press conference after every one of its meetings, instead of the current schedule of one press conference per quarter. The market could read this development as hawkish, as it would increase the number of “live” meetings each year; indeed, the US dollar saw a quick spike after the Wall Street Journal reported that Powell was weighing that idea earlier today.

Speaking of the greenback, the dollar index is testing its highest level in a week after tentatively breaking out of a possible “bullish flag” pattern today. A more hawkish meeting, through a rise in the “dots”, more concern about inflation, or the announcement of more press conferences, could see the dollar index rise back toward its 11-month high near 95.00. On the other hand, another noncommittal, steady-as-she-goes interest rate hike (and little else) could disappoint some dollar bulls and take the greenback down toward last week’s trough in the lower-93.00s. 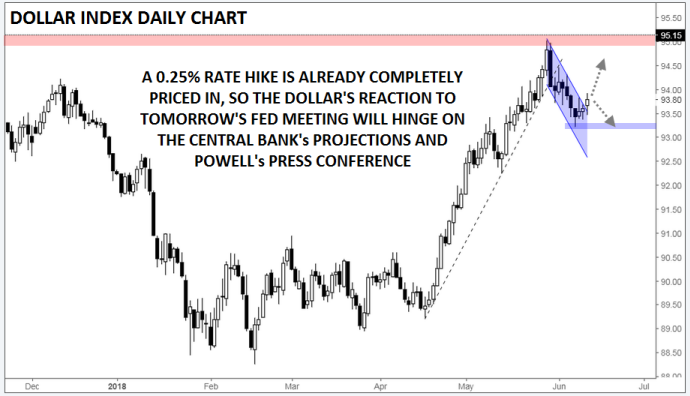