Markets may know more when Powell and Treasury Secretary Yellen testify in front of Congress on Tuesday.

At the Fed meeting on November 3rd, the FOMC finally announced that they would begin tapering their bond purchases by $15 billion per month, made up of $10 billion in US Treasuries and $5 billion in MBS. However, they also said that they can adjust the pace of tapering as warranted.  In addition, the FOMC also changed the wording regarding “transitory”, to now mean that “factors are expected to be transitory”!  During the press conference, (newly re-appointed) Fed Governor Powell said that the focus of the meeting was on tapering bonds, and NOT on raising interest rates.  According to Powell, once the economy reaches maximum employment, only then will the Fed consider the supply chain issues (which is causing much of the inflation).  The Fed said they expect these issues to last well into next year.

With inflation data skyrocketing since the last meeting,  members of FOMC have been taking a more hawkish stance on the possibility that the Fed may increase the pace of tapering from the current $15 billion a month.  These speakers include, Bostic, Bullard, Waller, Clarida, and Daly.  The minutes of the November 3rd meeting showed that there indeed, some members were a bit more hawkish than Fed Chairman Powell led the markets to believe in his press conference.  Reading through the minutes showed some of the more hawkish language:

With the hawkish comments from Fed speakers as of late, combined with the hawkish leaning FOMC minutes for November 3rd, it makes sense that the EUR/USD would be trending lower.  After all, many officials from the ECB are making the opposite comments.  On a 240-minute timeframe, EUR/USD has recently broken through the 61.8% Fibonacci retracement level from the lows of March 2020 to the highs of January 2021 at 1.1290.  In doing so, price moved beyond the bottom trendline of the downward sloping channel the pair has been in since late May.  The next support level isn’t until horizontal support at the March 30th highs of 1.1145. However, notice that the EUR/USD price is diverging with the RSI, indicating the pair could be ready for a bounce. This may be especially true with the illiquid markets during US hours over Thursday and Friday.  Horizontal resistance is at 1.2260.  Above there is the downward sloping trendline from the channel near 1.1300, then the highs of November 18th at 1.1374. 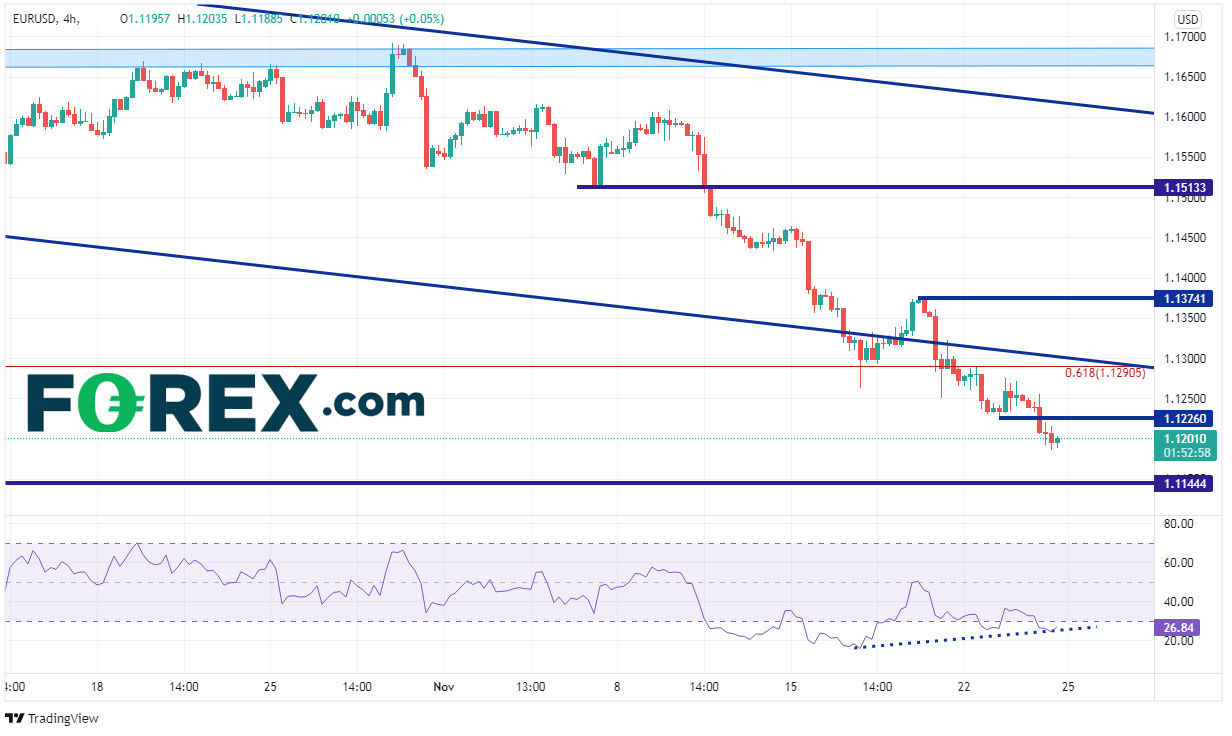 With the FOMC minutes showing a more hawkish picture than the Powell has been leading markets to believe, the bar has been lowered for an increase in the pace of tapering at the December meeting.  In addition, Fed speakers have been a bit more hawkish.  Are they setting us up for something?  Markets may know more when Powell and Treasury Secretary Yellen testify in front of Congress on Tuesday. Until then, keep a close eye on EUR/USD.  There may be some profit taking over the US holidays and ahead of Tuesday’s event.