The Federal Reserve’s two-day FOMC meeting concludes on Wednesday, and markets are heavily focused on Fed officials’ latest economic projections – more specifically, the outlook for future interest rates as represented by the Fed’s “dot plot.” Also in clear focus amid Wednesday’s FOMC rate decision, policy statement, economic projections, and press conference will be how markets judge the new Fed Chair Jerome Powell, who is presiding over an FOMC meeting for the first time. Powell has previously represented a more hawkish stance than his predecessor, as was evident in his recent Congressional testimony.

An interest rate hike of 25 basis points on Wednesday is overwhelmingly expected. A day before the decision, financial markets continue to price-in nearly a 95% chance of such a hike. While there are remote possibilities of either a rate hike greater than 25 basis points or no rate hike at all, they are both highly unlikely at this juncture. Of course, if either of these possibilities is indeed realized, the market impact on equities and the US dollar is likely to be very substantial.

Since there are such high expectations for a 25-basis-point rate hike – and assuming that this will indeed be the decision outcome – the main market focus will fall squarely on the Fed's outlook for further hikes into 2018 and beyond. Therefore, the Fed’s dot plot projections will take center stage, along with the press conference that will highlight Powell’s policy stance and outlook as the new Fed Chair. 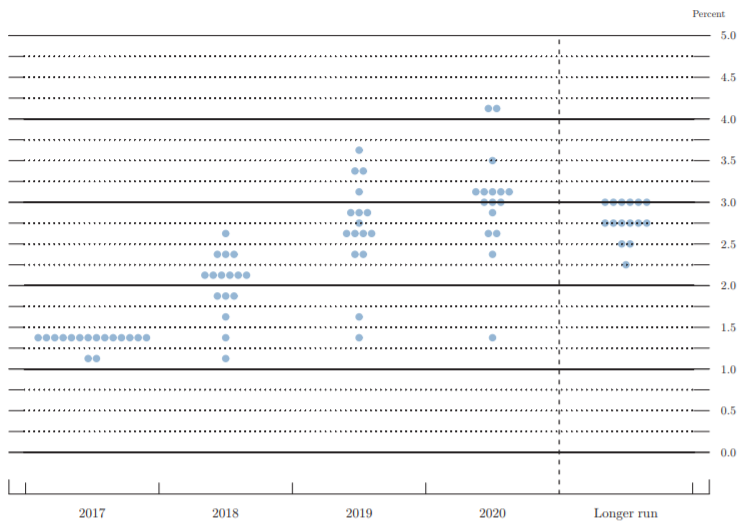 The last time a dot plot was released was in December of 2017. Then, the median outlook of Fed officials was for three rate hikes in 2018. For 2019, the median was 2.5 hikes. Recently, however, speculation has emerged that the Fed may become more hawkish than previously thought, which would be represented by a potential rise in 2018’s median outlook to four rate hikes. This speculation was initially sparked in early February by higher-than-expected US wage growth figures, which were then followed by higher-than-expected consumer inflation data. In addition, government bond yields have continued to rise near long-term highs as fears of overheating inflation increased. Since February, however, wage growth and consumer inflation data have pointed to weaker inflation than initially feared, somewhat reducing concerns about the potential for more aggressive Fed rate hikes.

While concerns stemming from inflation data have eased a bit lately, other major factors are in focus for the Fed. Recent US tax reforms, plans for more US government spending, and the possibility of higher prices due to steep import tariffs put forth by President Trump, could potentially help compel the Fed to become more hawkish than expected. Whether these and other factors actually result in a rise for the 2018 median rate outlook remains to be seen. While a dot plot median increase to four rate hikes in 2018 is certainly a possibility on Wednesday, a slightly greater likelihood is that the median projections will remain at or around December’s levels – but they may potentially be upgraded at the next major FOMC meeting in June if the prevailing inflation and growth data at that time warrant it.

If there is any decision outcome on Wednesday other than the widely-expected 25-basis-point rate hike, market reactions could be dramatic. A rate hike greater than 25 basis points (an exceptionally remote possibility) could cause some market havoc for equities while likely providing a sharp boost for the US dollar. In contrast, a decision to keep rates unchanged (also a low-probability outcome) should spark a significant stock rally while placing increased pressure on the dollar.

As for the dot plot, a median projection that remains at or near December’s level of three rate hikes in 2018 should give a boost to stock markets, which have recently been jittery about the prospect of a more hawkish Fed. In this case, the US dollar should continue to trade under pressure. Any median rise above three (e.g., four) could cause a further sharp pullback for stocks while boosting the US dollar.

Aside from the actual interest rate decision and dot plot projections, markets will also be closely scrutinizing how Fed Chair Powell’s tone and rhetoric differ from those of his predecessor, Janet Yellen. While differences could indeed be discerned based on Powell’s recent Congressional testimony, which skewed to the hawkish side, his first meeting at the helm of the FOMC will provide the markets with more solid evidence of his overall monetary policy stance and what may be expected from him in the months and years ahead.