FOMC Preview: One (or Two) and Done?

In order to support inflation, we expect the central bank to cut interest rates by just 25bps this week and leave the door open to another small cut in September. Beyond correcting the over-ambitious last rate hike or two from late last year, the Fed will likely prefer to remain on sidelines unless the economy takes a sharp turn lower.

The Federal Reserve has been within its pre-meeting “blackout period” for more than a week now, but that restriction doesn’t apply to President Trump. Yesterday, the President tweeted that “quantitative tightening was a big mistake” and that the “Fed has made all of the wrong moves. A small rate cut is not enough…”

Of course, there’s a long history of political leaders trying to intervene into central bank policy. By contrast, less biased, more informed sources have recently argued for a more measured approach. Yesterday, former Fed Chairwoman Yellen endorsed a 25bps rate cut, but stated that she “wouldn’t see [it] as the beginning… of a major easing cycle.” Similarly, former New York Fed President Dudley wrote this morning that he thinks “there’s a good chance the Fed won’t be cutting further anytime soon” (after today). In other words, arguably the two people on the planet that are most well-connected to current Fed governors (and are legally allowed to speak about it) have both suggested that the Fed is likely to be conservative and is unlikely to embark on a prolonged easing cycle this week.

Meanwhile, the US economy continues to chug along at a steady, if unimpressive rate. Last week’s GDP report printed better than anticipated, showing 2.1% annualized growth in Q2, and more recent PMI figures remain among the strongest in the world, despite a small dip of late. The only sore spot for the Fed is inflation, which remains stubbornly below the central bank’s 2.0% target, with this morning’s Core PCE report printing at just 1.6% y/y. 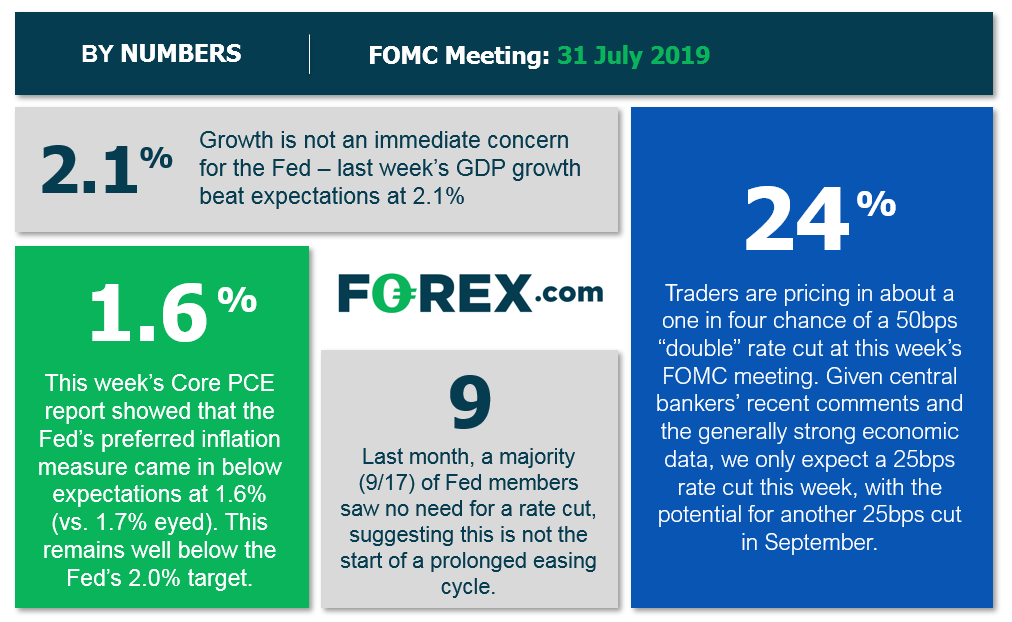 In order to support inflation, we expect the central bank to cut interest rates by just 25bps this week and leave the door open to another small cut in September. Beyond correcting the over-ambitious last rate hike or two from late last year, the Fed will likely prefer to remain on sidelines unless the economy takes a sharp turn lower. Essentially, the central bank may opt for one or two “insurance cuts,” but the market should not view this as the start of a prolonged easing cycle yet.

A small rate cut will have only a limited impact on the US economy, which is balancing solid domestic growth against headwinds from global trade and geopolitical uncertainty.

By this point, the interest rate decision itself (assuming it’s for a 25bps cut) has already been discounted by the market, so the forward-looking outlook and the tone of Chairman Powell’s press conference will be the major driver for markets. As it stands, the market is expecting 3-4 interest rate reductions by this time next year; if the Fed is able to communicate a “one-(or two-)and-done” approach to rate cuts, the US dollar would likely rally, while US stocks may fall.