A minority of Fed policymakers (7 out of 17) expect any further rate cuts this year.

As we anticipated in our FOMC Preview report earlier today, the Federal Reserve did follow through with the predicted 0.25% interest rate cut, leaving the benchmark fed funds rate in the 1.75-2.00% range. Of course, that outcome was about 95% priced in to the market, so traders were more interested in the central bank’s monetary policy statement, summary of economic projections, and Chairman Powell’s press conference:

As is often the case, there were only token adjustments to the Fed’s monetary policy statement. The central bank upgraded its assessment of household spending and (unsurprisingly) downgraded its view on exports. Beyond those minor adjustments, the only other noteworthy development was that three members of the FOMC dissented from the group’s decision: Esther George and Eric Rosengren voted in favor of leaving interest rates unchanged, while James Bullard favored an immediate 50bps cut.

As with the monetary policy statement, the biggest surprise in the Fed’s economic projections may be the lack of changes. Despite all the geopolitical and economic developments over the last three months, the central bank left its projections essentially unchanged from June. While there were minor tweaks at the margin (GDP and unemployment forecasts were raised by one tick for 2019 and the GDP forecast for 2021 also ticked up), these were generally marking the current forecasts “to market,” rather than making a substantive change to the economic outlook.

The central bank’s “dot plot” of interest rate expectations, however, saw some major tweaks. The median Fed policymaker cut his/her forecast for interest rates by 0.5% for 2019, 0.2% for 2020, and 0.3% for 2021. In other words, the Fed has acknowledged that interest rates will remain lower for longer. Interestingly, this was actually less dovish than many had expected. According to today’s forecasts, a minority of Fed policymakers (7 out of 17) expect any further rate cuts this year, and 5 actually anticipate an interest rate hike. With many traders banking on two more rate cuts this year, it’s no surprise that we’ve seen a kneejerk reaction higher in the greenback. 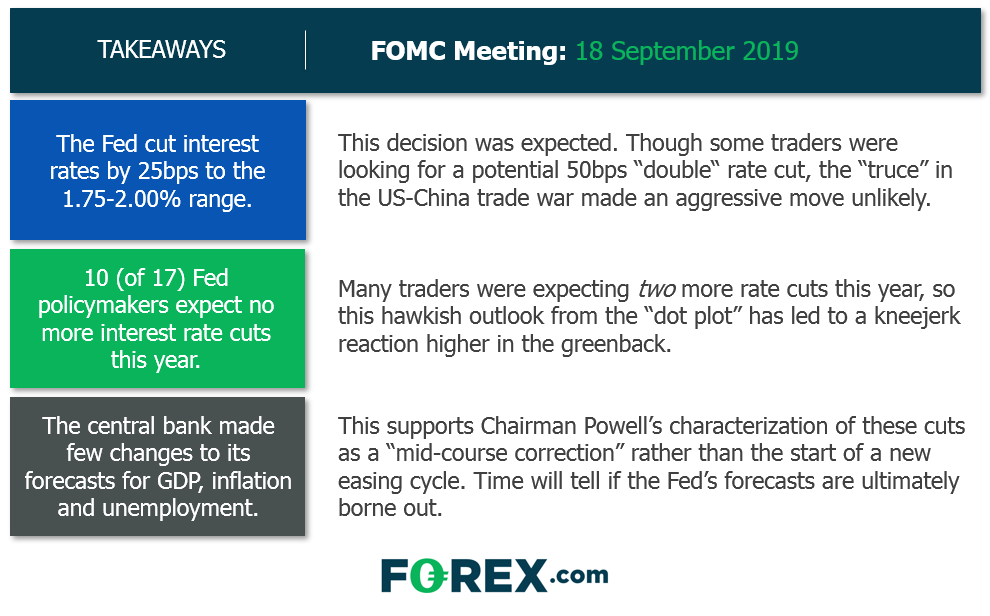 Fed Chairman Powell is taking the stage as we go to press and traders will be keen to see how he characterizes today’s decision. If he implies that the expected “mid-course correction” to interest rates could be complete, we’ll likely see the dollar rise and stocks fall as traders price out the potential for further cuts. On the other hand, a more dovish outlook that indicates another rate cut is on the table this year could temper the immediate bullish-dollar / bearish stocks reaction, but the sharp divergence between the market’s dovish expectations and the Fed’s “hawkish cut” suggest the initial reactions may linger.

Powell will no doubt have to field questions about the ongoing turmoil in the money markets and the Fed’s plans to address it.