As we noted in yesterday’s FOMC Preview report, the Fed has an unblemished record of meeting market expectations over the last decade, so today’s decision to cut interest rates by 25bps to the 1.50-1.75% range was hardly a surprise for traders.

Going a step further, most traders expected a so-called “hawkish cut,” where the central bank seeks to tamp down expectations for future interest rate reductions. The statement supported this outlook in two primary ways:

1.      Removed phrase stating that the committee “…will act to sustain the expansion…”

The only substantive change the committee’s monetary policy statement was to remove the phrase its used to hint at interest rate cuts in the past. With this tweak, it’s clear that the Fed views its “mid-cycle adjustment” as complete and that any further interest rate cuts will be in reaction to slowing economic data.

After dissenting in favor of an immediate 50bps cut to the Fed Funds rate last month, James Bullard joined the majority in voting for just a 25bps cut this time around. Meanwhile, the hawkish voters (Esther George and Eric Rosengren) still preferred rates to remain steady, meaning that in aggregate, the central bank may be leaning toward leaving interest rates unchanged it December as it currently stands. 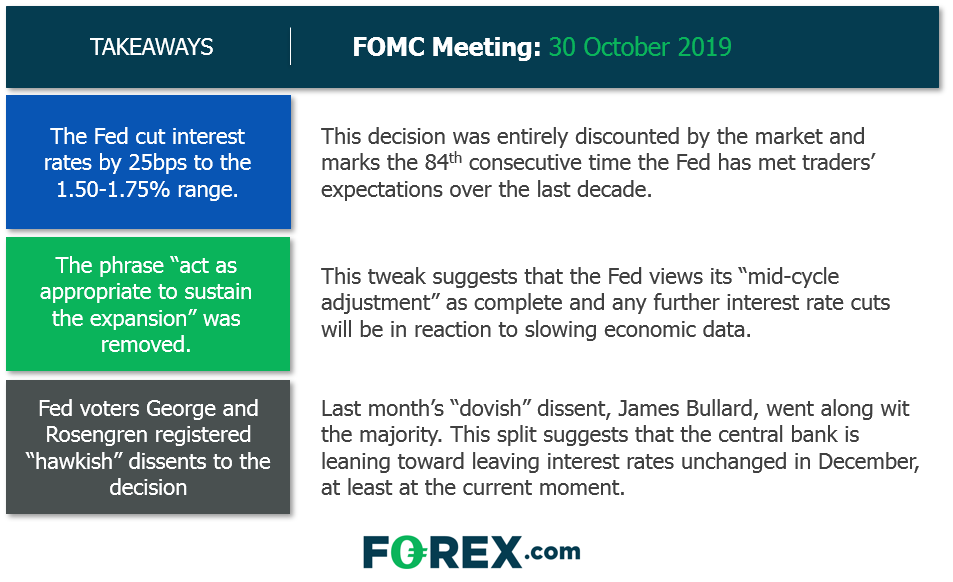 In the immediate reaction to the Fed’s decision, traders trimmed bets on an interest rate cut next month, with the CME’s FedWatch tool now showing the market-implied odds of such a move dropping from 27% to 22% ahead of Fed Chairman Powell’s press conference. In terms of market moves, we’ve seen the US dollar tack on about 10 pips against its major rivals and yields on US treasury bonds tick up 1-2bps.

In his prepared remarks, Chairman Powell has noted that monetary policy is “in a good place now,” supporting the notion that any further cuts will require deteriorating data. Stay tuned to our twitter account for further actionable takeaways from Powell’s presser!