In this week’s edition, we discuss the dollar and its impressive rally, and ponder over the pounded pound, ahead of key central bank meetings from both sides of the pond next week.

Welcome to Forex Friday, a weekly report in which we discuss selected currency themes mainly from a macro viewpoint, but we also throw in a pinch of technical analysis here and there. In this week’s edition, we discuss the dollar and its impressive rally, and ponder over the pounded pound, ahead of key central bank meetings from both sides of the pond next week.

The Dollar Index broke above the 2020 high this week, with the greenback rising against all major currencies, before easing back somewhat so far in Friday’s session amid profit-taking and bargain hunting of downbeat foreign currencies. The King of FX has been doing exceptionally well against currencies where the central bank is still relatively more dovish, such as the yen, yuan, euro and franc. Traders are convinced the FOMC will raise rates by 50 basis points next Wednesday and signal more aggressive hikes in the months ahead due to soaring inflationary pressures. Against the fundamental backdrop, it is hard to bet against the greenback. However, the dollar’s rally looks a bit overdone against some of the slightly more stronger currencies like the CAD. I also think the GBP/USD may have fallen too far by dipping below the 1.25 handle this week. See below for more on the cable.

But could the Fed trigger a sell-off in the dollar?

Well, the dollar’s aggressive rally in recent weeks suggests the market has been pricing in the Fed’s projected hikes and quantitative tightening.  Having talked it up so much, the key risk would be if the FOMC decides to hike by 25 basis points instead of 50 on Wednesday. This would catch everyone guard, as it 50 bps is precisely what the market is pricing in, judging by the CME’s useful FedWatch tool: 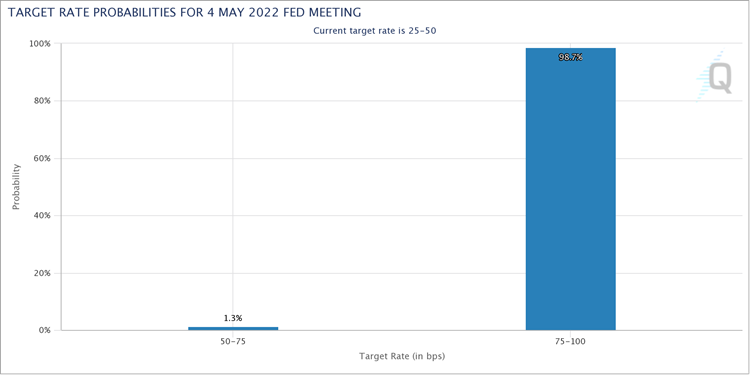 Meanwhile, the Fed’s preferred measure of inflation will be published later on Friday: Core PCE Price Index is seen rising another 0.3% or 5.3% year-over-year. It is unlikely that this, the surprise negative GDP print we saw on Thursday, or any other macro pointers that will be released from now until Wednesday will have any impact on the Fed’s decision to hike by 50 bps.

The GBP/USD has had a very rough couple of weeks as it slumped more than 600 pips from above 1.30 to below 1.25 on the back of expectations that tightening from the Federal Reserve and Bank of England will diverge with the former seen becoming more aggressive than the latter. But I reckon the worst of the selling is over and there is a good possibility for a decent rebound as we look ahead to a busy week of central bank action next week with both the Fed and BoE set to tighten their respective policies.

Now the Bank of England has already raised rates three times and a fourth increase is almost certain. The uncertainty lies about the pace of tightening: will it be 25 or 50 basis points on Thursday? Governor Bailey recently implicitly implied it will be 25 bps, as the Bank is walking a ‘narrow path’ between growth and inflation. But unlike some of the other central banks, like the Bank of Japan or Swiss National Bank, the BoE is tightening its belt. This should therefore keep the downside limited for the cable.

We like a bit of technical analysis and the psychological importance of the 1.25 handle cannot be ignored, which helps explain why we have seen some short-side profit taking here and long-side bargain hunting. It is even more interesting when you consider that the 61.8% Fibonacci retracement level also converges around 1.2500. Could we see a bounce back to 1.2700 from here? If the BoE is more hawkish in the week ahead, I wouldn’t rule out a revisit of 1.3000. 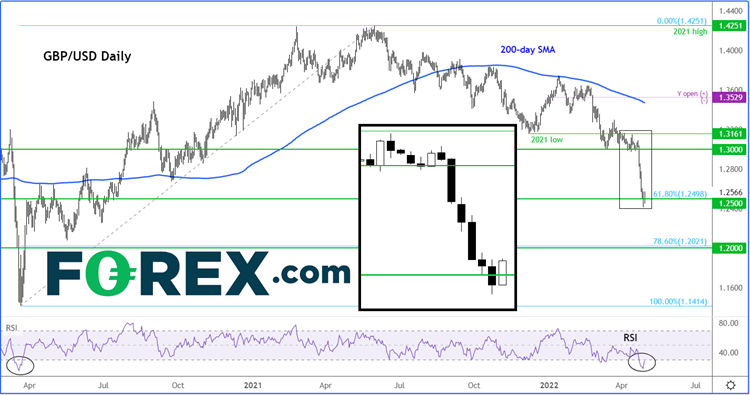