<p>Not a lot was expected to come out of today’s ECB meeting and press conference, and so it proved. The euro huffed and puffed during Mario Draghi’s press conference but ultimately fell against the US dollar, while the latter bounced back presumably on the back of the weekly jobless claims figure (which dropped to the lowest level since 1973) for today’s other US data releases were, again, poor. The slightly stronger dollar weighed on buck-denominated commodities which fell across the board after rallying earlier in the day. The resulting weakness in oil pressurised the Canadian dollar, causing the EUR/CAD to rally.</p>

Not a lot was expected to come out of today’s ECB meeting and press conference, and so it proved. The euro huffed and puffed during Mario Draghi’s press conference but ultimately fell against the US dollar, while the latter bounced back presumably on the back of the weekly jobless claims figure (which dropped to the lowest level since 1973) for today’s other US data releases were, again, poor. The slightly stronger dollar weighed on buck-denominated commodities which fell across the board after rallying earlier in the day. The resulting weakness in oil pressurised the Canadian dollar, causing the EUR/CAD to rally.

This pair is going to be in focus again tomorrow because we will have important data from both the Eurozone and Canada. From the Eurozone, the monthly manufacturing and services PMI figures will be released tomorrow morning, while from Canada, it is the latest CPI and retail sales figures that will dominate the early part of the North American session. So expect to see plenty of volatility in the EUR/CAD. But despite today’s bounce, the path of least resistance remains to the downside for the EUR/CAD. Not only have oil prices rallied significantly this year, boosting the appeal of the Loonie, the Bank of Canada’s neutral policy stance also contrasts sharply with the European Central Bank. Consequently, further weakness is likely to be seen in this pair going forward.

From a technical perspective, the EUR/CAD appears a little oversold, judging by the RSI momentum indicator which has bounced off the 30 level today. But the underlying price action is bearish, as it has been making a series of lower lows and lower highs of late. Having broken through a medium-term bullish trend line recently, the faster 50-day simple moving average is set to cross below the slower 200-day SMA to form a "death crossover," which would further confirm the bearish trend. In addition, the EUR/CAD appears to be stuck inside a bearish channel. The shapes of recent candlesticks appear pretty bearish, too.

For all the above reasons, the sellers will now want to see the EUR/CAD hold below the previous support at 1.4400. If seen, the EUR/CAD may then start its descend towards the next bearish targets shown on the chart in blue: the 61.8% Fibonacci retracement comes in at 1.4200, while the next psychological level, at 1.4000, is also not that far now. Potentially, the EUR/CAD could, over time, fall to significantly lower levels as it trades inside the bearish channel.

On the other hand, if the EUR/CAD breaks back above the pivotal 1.44 handle, say as a result of tomorrow’s economic data or a sudden fall in the price of oil, then a rally towards the resistance trend of the bear channel would not surprise me. 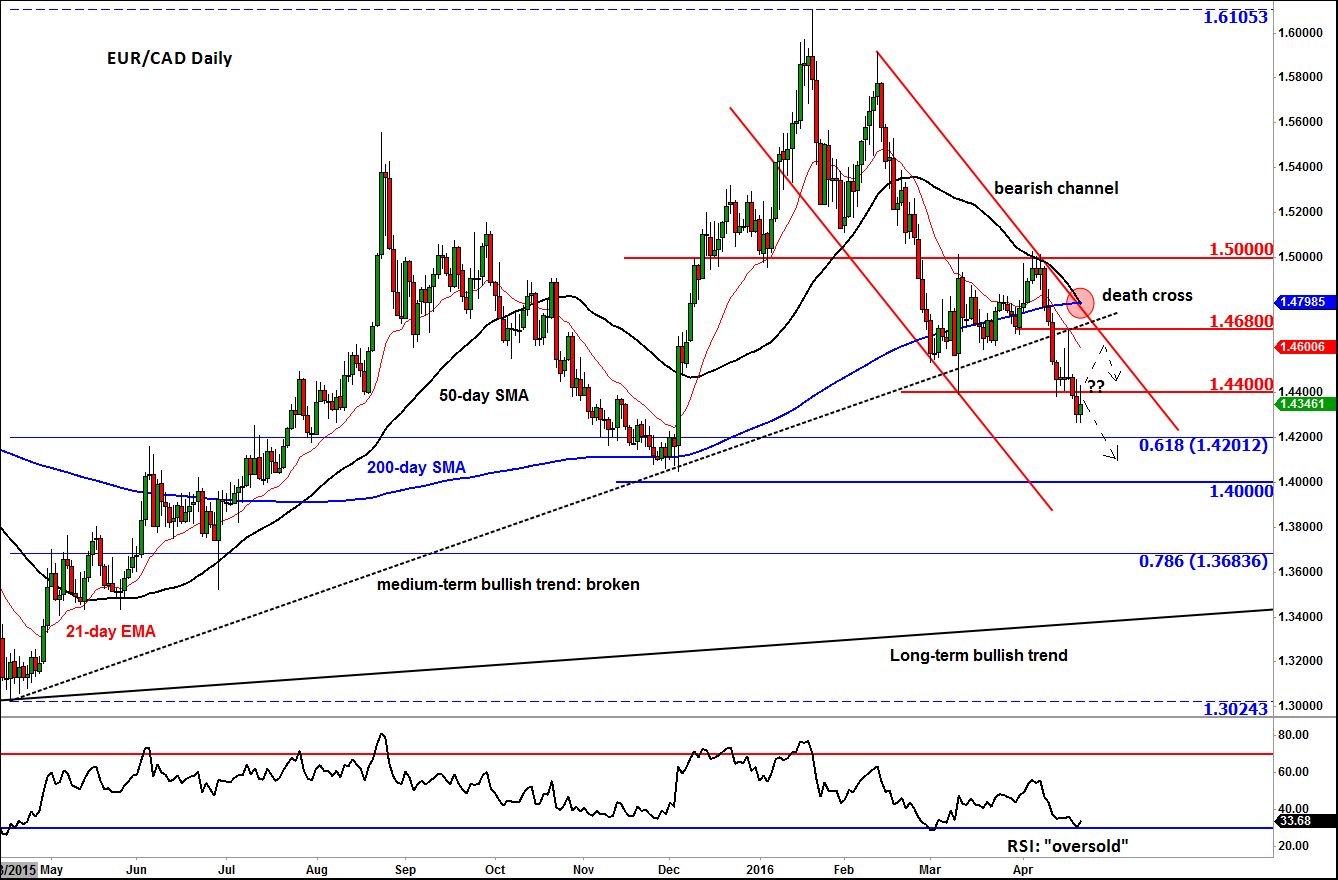