FTSE could resume rally ahead of Supreme Court ruling on Brexit

Stock markets reaction to Donald Trump’s inauguration on Friday was… well, muted. The New US President delivered a speech which was centred on the idea of protectionism but made no mention of the Mexican wall. I don’t understand why everyone was expecting to see fireworks in the markets on Friday. Shocking as it may sound, he was going to become the 45th US President – this wasn’t news. Granted he didn’t say anything extraordinary controversial this time around, but the markets had already spoken when he won the elections: stocks surged higher after an initial dip. So, nothing has fundamentally changed for the stock markets in my view.

Stock markets reaction to Donald Trump’s inauguration on Friday was… well, muted. The New US President delivered a speech which was centred on the idea of protectionism but made no mention of the Mexican wall. I don’t understand why everyone was expecting to see fireworks in the markets on Friday. Shocking as it may sound, he was going to become the 45th US President – this wasn’t news. Granted he didn’t say anything extraordinary controversial this time around, but the markets had already spoken when he won the elections: stocks surged higher after an initial dip. So, nothing has fundamentally changed for the stock markets in my view. With most major central banks still remaining pretty much dovish across the board, and with the US government about to splash the cash, “buying the dips” is still the trade that will most likely work in the stock markets. Indeed, US indices remain near record highs, while in Europe the major stock averages are near multi-year highs. The UK’s FTSE 100 – which broke to a new all-time high at the start of last week – remains less than 200 points below its peak. Correct me if I am wrong, but this is not bearish. Not yet anyway.

The FTSE has been held back a little by a rebounding pound, though the impact of this will likely be short-lived. The Supreme Court’s ruling on whether MPs must give their assent to Brexit is the next risk event for the FTSE, tomorrow. It is likely that the government will lose its appeal which means Theresa May will need to hold a parliamentary vote to trigger Article 50 before beginning the process of Brexit.  Also important to the FTSE will be the release of UK GDP, scheduled for release on Thursday. The economy is expected to have grown about half a percent in the final quarter of last year, a touch weaker than 0.6% recorded in the third quarter. On a micro level, earnings and/or trading statements from EasyJet, Dixons Carphone (both on Tuesday) and Sky (Thursday) may have some impact on the FTSE too. Meanwhile there will be plenty of company earnings from the US, while the key macro data from the world’s largest economy will be the Q4 GDP, on Friday.

So, from a fundamental point of view, there are plenty of factors which could move the markets this week. Meanwhile from a technical perspective, the FTSE has dropped to test a key support level today at around the 7120/30 area. This level marks the previous record highs that were achieved back in April 2015 and October 2016. Previously resistance, this 7120/30 area could now turn into support, potentially leading to another rally to a new all-time high. If this support area holds, the next immediate resistance level to watch is at 7220, with additional levels coming in at 7292 and then the previous high at 7354/5. Above this level, the next bullish objective would be at 7564/5, the 127.2% Fibonacci extension of the downswing from the 2015 high point.

However, if support in the 7120/30 area breaks then we may see a much deeper retracement before the rally potentially resumes. In this case, a potential drop to at least the 50-day moving average and support at 6995 would not come as surprise to us. 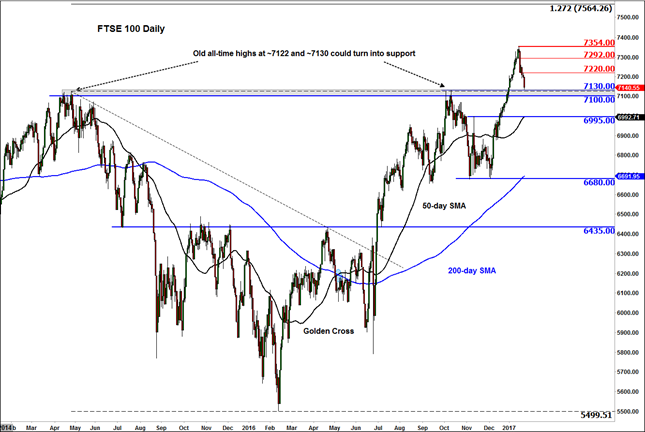