FTSE pushes on despite Brexit uncertainty

In recent days, we have been talking up the prospects of stronger recovery in European stock markets, owing in part to the falling government bond yields as a result of major central banks like the European Central Bank turning dovish recently...

In recent days, we have been talking up the prospects of stronger recovery in European stock markets, owing in part to the falling government bond yields as a result of major central banks like the European Central Bank turning dovish recently. The German DAX index, for example, is looking a lot healthier now given its breakout above that 11700 resistance level as we had highlighted the possibility previously. Other EU indices are also starting to look positive, even the UK’s FTSE 100, which has underperformed year-to-date because of Brexit. On that front, the latest news is that EU leaders are apparently planning on a contingent offer on Brexit extension in light of the Speaker of the House of Commons, John Bercow, yesterday blocking Prime Minister Theresa May's plan to put her Brexit deal to another vote.

However, with metal and crude prices rising, and sentiment towards risk remaining generally positive, the commodity-heavy index is not doing too badly. Among other bullish technical considerations, the FTSE has:

So, as things stand, the path of least resistance is to the upside and we therefore expect supports to be respected and resistances to break in the near-term outlook. The next major area of resistance is around 7450, where the FTSE might be heading towards in the coming days. 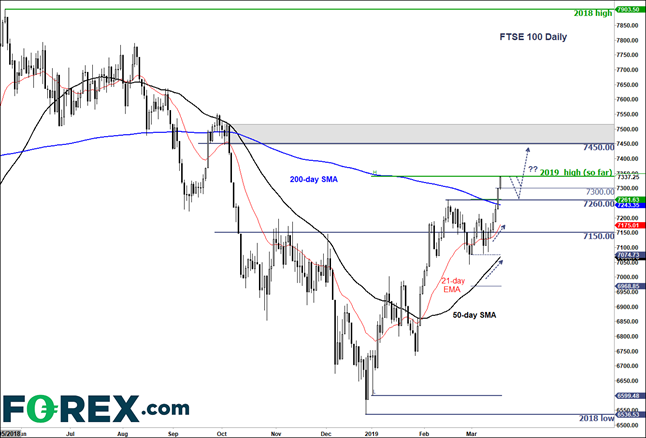