The sterling-sensitive FTSE 100 could find join the global stock market rally, now that the pound has stopped rising as investors await fresh Brexit direction. After so much debate, back and forth, a few extensions and two Prime Ministers later, UK Parliament has decided to call a general election on December 12 in order to break the Brexit deadlock. With Brexit paused for a few weeks, investors will be able to focus on macro factors driving global markets, as well as company earnings.

The immediate focus will be on the Federal Reserve, which is set to make another 25 basis point rate cut this evening. The markets could rally if the central bank turns out to be more dovish than expected, like the Bank of Canada was today. However, the Fed may opt for a hawkish hike instead – if so, this could trigger a bit of a negative reaction in the markets. Still, with most other major central banks all in easing mode, any potential Fed-related downside could be limited.

Big earnings from both sides of the pond could impact FTSE

Once the FOMC is out of the way, the focus will then turn back to earnings, with quarterly results from tech giants Apple and Facebook due to be released after Wall Street closes. Such is their importance that the results could impact not just the US markets, but global markets too – including the FTSE futures. As far as the FTSE 100 companies are concerned, we will have results from the likes of Royal Dutch Shell, BT, Lloyds Banking Group and International Consolidated Airlines Group all to look forward tomorrow.  These are not small companies by any means and the FTSE will move on the back of their results tomorrow morning. 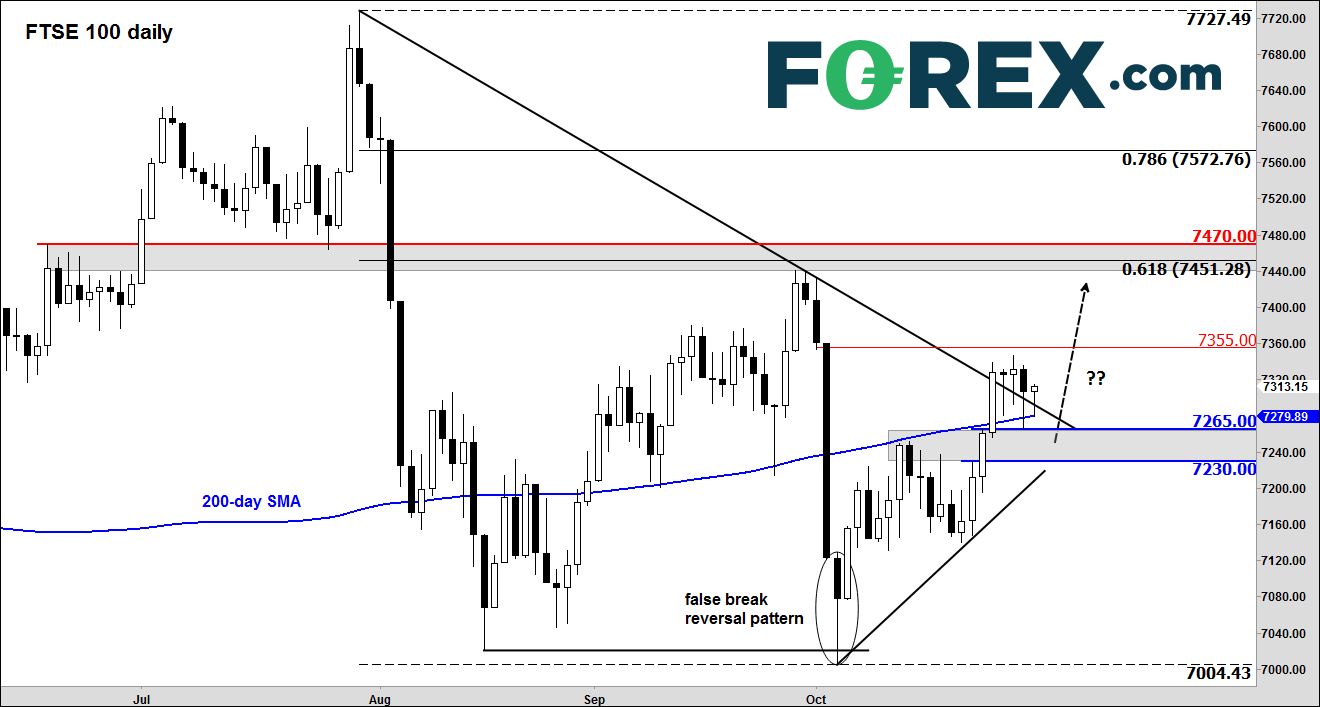 Source: eSignal and FOREX.com.Please note this product may not be available to trade in all regions.

Ahead of the FOMC and big earnings, the FTSE was holding its own relatively well. At the time of writing, it was hitting fresh highs on the day after the earlier drop to the 200-day saw the buyers step in to defend this key moving average. Key support is in the zone between 7230 and 7265. These were previous resistance levels. As long as this area holds, the path of least resistance will remain to the upside. The next upside targets include 7355 and the 7450/70 range.

However, if the abovementioned earnings or otherwise causes the FTSE to turn around and it goes on to break below the bullish trend line and recent lows, then this will likely invalidate this bullish view.