What a brutal year 2016 is proving to be so far for global equity markets. Stocks have been absolutely battered over the past two-and-a-bit weeks and there is still no end in sight for this relentless downward pressure. At the time of this writing, the major European stock indices were down between 2.5 and 3.0 per cent, with the UK’s FTSE taking the brunt off the sell-off due to its greater exposure to the slumping commodities. BHP and Anglo were leading the declines in London with falls of about 6-7 per cent, followed by Shell, which was down 5.5%, after reporting a sharp drop in profits due to the plunging price of oil. As well as the oil price, investors are continuing to fret over a global economic slowdown. These worries were exacerbated by the disappointing growth and industrial production figures from China and another downgrade of global economic growth forecasts yesterday by the IMF.

In the UK, employment is continuing to improve, but the slowdown in wage growth is a concern. The ONS figures released today showed the rate of unemployment fell to 5.1% in the three months to November, which is a 10-year low, while jobless claims dropped by 4,300 in December. Both figures topped expectations. However, the 3-month moving average in wages, including bonuses, grew just 2.0% in November compared to the same period the year before. This represented a sharp slowdown from 2.4% previously and was worse than a drop to 2.1% expected, underscoring the Bank of England worries that the UK is not ready for an interest rate rise anytime soon.

Consequently, the pound is finding itself under severe pressure, although stocks are not showing any enthusiasm to rally either because of the global economic concerns and the fact that the major central banks have so far resisted the temptation to expand their unconventional policies further. In fact, the US Federal Reserve has already hiked interest rates, a decision it is probably regretting now. The stronger dollar has further undermined some buck-denominated commodities. More worryingly, emerging market currencies and stocks have been dropping sharply as yield-seeking investors move back into the dollar. This is another factor behind the global stock market sell-off.

With sentiment growing ever more bearish, the risk for a much bigger correction is growing, especially with oil prices now holding below the $30 handle. But soothing words from Mario Draghi at the ECB’s press conference tomorrow may help to provide some relief, so be wary of a potential bounce from these severely oversold levels. Nevertheless, the trend is now bearish and so any short-term bounces may be used by traders as selling rather than buying opportunities.

Indeed, the sell-off has caused severe damage and the chart of the FTSE is looking anything but bullish. As can be seen, below, the index is now not only below its 2015 low of 5765/70, it has also taken out the long-term 38.2% Fibonacci retracement level of the entire upswing from 2009. The 2015 low could be the short-term resistance level to watch now; further resistances come in at 5865 and then 6000 – these levels were previously support and/or resistance. If the selling pressure continues, the bears may aim for the Fibonacci extensions level of the bounce in August as their next targets, at 5570/5 (127.2%) and 5320/5 (161.8%). The former also ties in with the 161.8% extension level of another swing (i.e. the BC move), making it an even friendlier take-profit level. But given that the trend is bearish, I wouldn’t be surprised if the FTSE eventually goes on to drop to the 5290-5325 area next. This is where the long-term 50% retracement level convergences with the 161.8% extension of the bounce from August (i.e. XA swing). 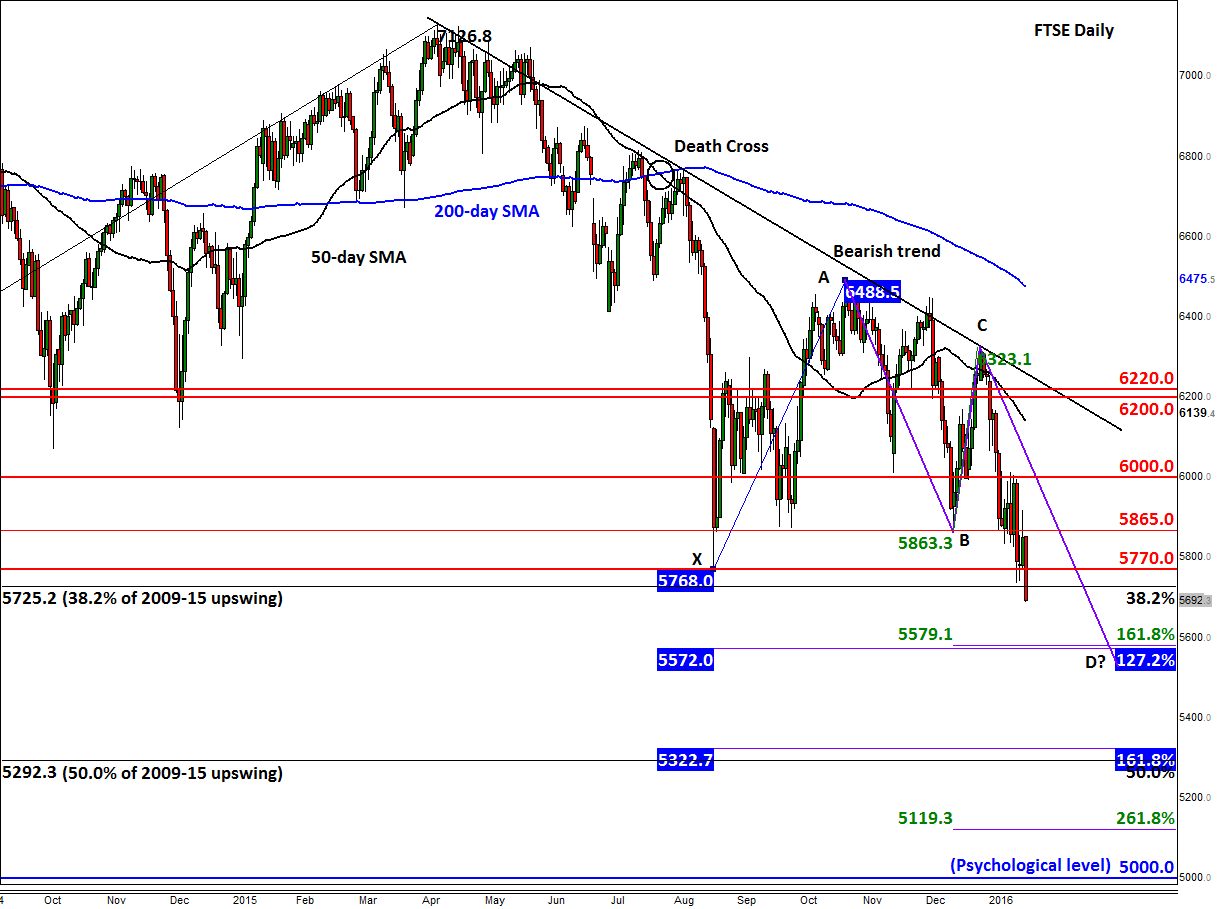